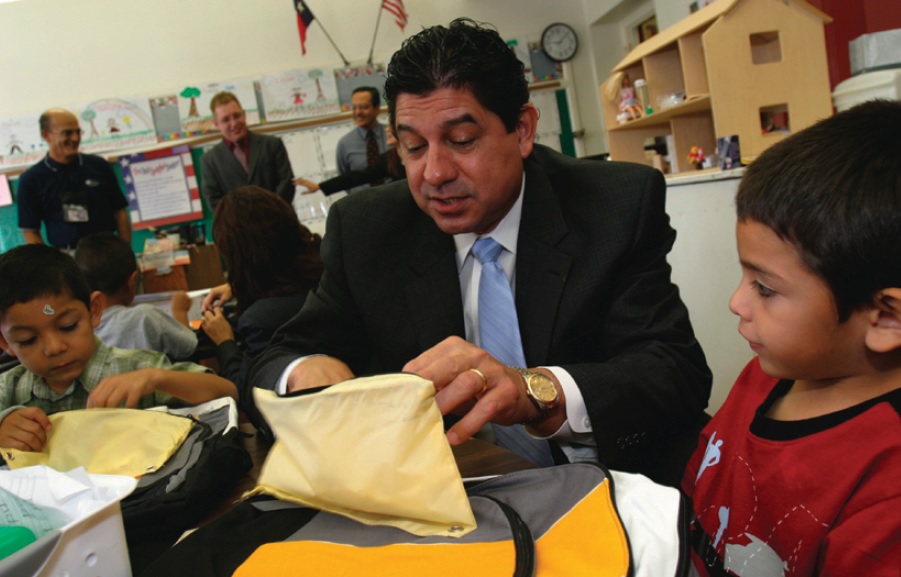 Superintendent Lorenzo Garcia was sentenced to three years at a federal prison for fraud and directing a scheme to manipulate state mandated test scores. (photo by Leonel Monroy Jr. courtesy of EPISD)

EL PASO—The battle over high-stakes student testing has never been more critical and nowhere more apparent than in El Paso, TX, where educators are morphing into criminals.

El Paso Independent School District’s Lorenzo García, is the first superintendent in the nation to be convicted of fraud.  Sentenced in October, he is currently serving a three-year sentence for directing a scheme to hide and manipulate the scores of English Language Learning (ELL) students in state-mandated tests.

Immigrant students trapped in the middle

From the day the El Paso Times broke this story last year, many have focused on, Los Desaparecidos –77 students who were coerced into dropping out of school by Garcia’s criminal tactics– but there are hundreds of thousands of students throughout Texas just like them.  Many blame the current educational system for making them disappear.

“The one size fits all model does not allow for districts like ours to succeed. So what other ways are there if you can’t succeed? Either you manipulate or you do not show the results the state wants, compared to a school district in Dallas or Highland Park where they don’t have to deal with these demographics or these issues,” said Canutillo School Board President Armando Rodriguez. The Texas Education Agency (TEA) reports that in the past decade there has been an increase of 230,000 ELL students. Currently about one in every six students in Texas is deficient to some degree in English proficiency and comes from a different educational, social and cultural background.

The number of immigrant students keeps increasing and so has the number of state mandated tests. A high school student taking the State of Texas Assessments of Academic Readiness or STAAR test this year must pass 15 exams in order to graduate; up from four last year under the previous state mandate.

“It makes no sense that some of these students have been here for two years and they are expected to take these tests,” Rodriguez said. “Not only is it a problem of language, but of content.”

Nearly 15 percent of all ELL students in Texas have been enrolled in U.S. schools for less than three years. Under TEA Assessment Policies high school students can only postpone their exit level tests during the first 12 months after the first day they enroll.

The latest STAAR results revealed that 123,000 students statewide failed at least one of the STAAR tests after three retakes; 80 percent of them were ELL students, most of them Hispanic.

Diane Raviteck, former assistant secretary of education under George H.W. Bush, explains that education used to be a state and local function, but since the passage of the No Child Left Behind Act in 2001 a federal run educational system has been established.

“The burden of these policies will fall heavily on low-income, minority communities, but many other communities will be affected as well,” wrote Raviteck in an email. In a recent news release, Commissioner of Education Michael L. Williams writing for the Texas Education Agency, explains how the STAAR system is misunderstood and it aims at improving student performance. He writes that the main reasons for these tests are to measure student progress and growth, to close performance gaps between low performing groups and to measure post-secondary readiness.

“I have heard the criticism of the previous accountability system, with its overemphasis on a school’s lowest performing areas and its blind spot to what a district or charter might be doing well,” said Commissioner Williams. “The new system makes use of multiple indicators to provide parents and taxpayers a more detailed overview of the successes, as well as areas of necessary improvement, for each school district, charter and campus.”

At the start of this year, 86 percent of all Texas school districts had adopted a resolution created by the Texas Association of School Administrators (TASA) to reform the current educational system.

Suzanne Marchman, director of communications at TASA said this “new vision” for public education is representative of 4.4 million students in Texas public schools and is based on the aspirations of citizens, parents, community leaders, teachers, and school board members who interact with these students every day.

Many of those who oppose this new educational system as do Raviteck and Rodriguez, fear that this movement to centralize education is just an effort to privatize the educational system. They said students and teachers are paying the consequences, but there is also a hefty price tag that comes with these tests.

Texas currently has a five-year, $468 million contract with Pearson, a multinational publishing company that develops prints, distributes and scores these state-mandated tests. By 2015 Texas taxpayers will have paid Pearson nearly $1.2 billion in a 15-year span. Texans Advocating for Meaningful Student Assessment (TAMSA) is a statewide, grassroots organization concerned with the overemphasis on high-stakes STAAR tests. They believe taxpayer dollars should be going into the classrooms and not to companies like Pearson. TAMSA stated that this money could have paid the salaries of more than 1,200 teachers for the past 15 years.

TAMSA board member, Theresa Trevino grew up in El Paso and she sees how critical this fight over high-stakes testing is for all border communities.

“People want a quick fix but that is not how it works,” said Trevino. “We are missing a lot of talent and we are placing them on the wrong track and that track leads them to drop out. This is not going to help these kids raise themselves or raise their families and that is what we should be trying to do.”