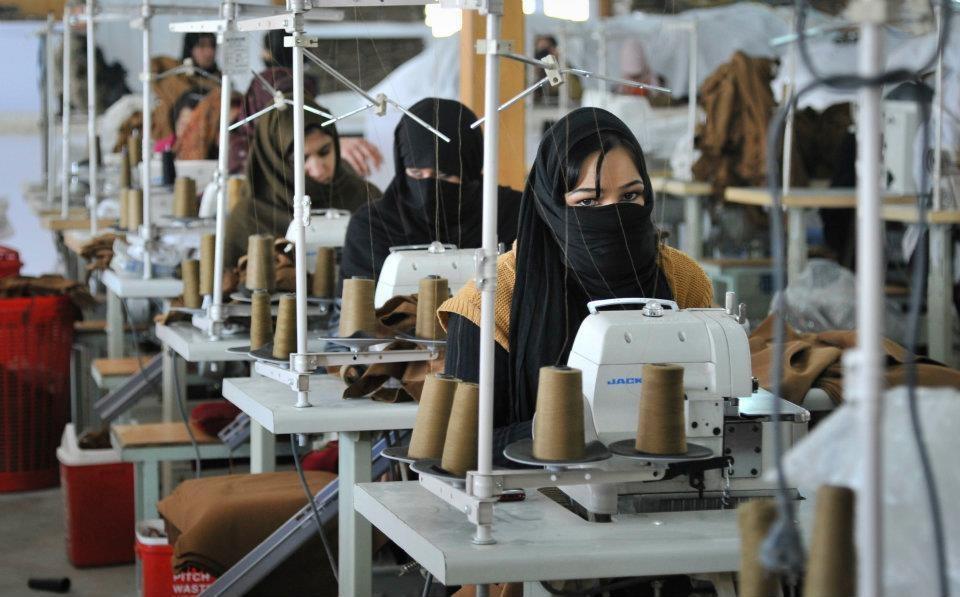 Afghan women work in sewing factories to make uniforms and blankets for their military. Afghanistan, 2011 (Photo Courtesy of Andrea Salazar) Afghan women work in sewing factories to make uniforms and blankets for their military. Afghanistan, 2011 (Photo Courtesy of Andrea Salazar)

EL PASO — Afghan women sit one behind another, feeding tan thread into their sewing machines, looking down at their work in concentration, while one gazes through the slit of her Hijab, her dark eyes piercing the camera lens.

This was a photo taken by El Paso native Andrea Salazar during her deployment two years ago. Joining the Air Force in 2009, Salazar has captured images from different parts of the world as a combat photographer in the military.

“I never thought about joining in high school,” Salazar said. “When I worked at Ft. Bliss [as a clerk], a veteran told me I would do well in the military. I looked into it but wondered if I could truly do it.”

During the last four years Salazar has been taking photographs of the rough terrain of Afghanistan and even more recently, a devastating earthquake in Japan.

“The photo [of the Afghan women] is my favorite.” She said, “The women were making blankets and military uniforms for their own country since we were helping forces build and protect themselves from the Taliban.”

Salazar, 27, joined the Air Force initially to be an airfield systems operator, but fate had other plans.

“I’m the middle child of my family and second child to join the Air Force,” Salazar said. “I originally joined as a Computer Systems Operator but during my fourth week of basic training, the job counselor told me that I had to change jobs due to some paperwork issues.”

At first, Salazar felt apprehensive when presented with the opportunity to become a combat photographer. She knew the technical aspects of operating a camera in stressful situations could be difficult. Nonetheless, she decided to take a chance and accepted the position. “Being a photographer in the military has definitely been mind blowing,” Salazar said. “I’ve been to places I never thought I would go.”

With her small frame and five-foot height, Salazar stands out amid her military counterparts. She was also the only Hispanic woman in her group of 13 when deploying to Afghanistan.

Her father, Michael Salazar, 58, describes the great, strong character that lies within his daughter’s petite stature.

“She always stood out,” he said. “She is five feet, but she’s a tough little girl. She has a black belt in Kung Fu, she’s just a little fire ball.”

Even when relying on her strong character, the military was not always easy for Salazar.

“I always think about being on the flight with 60 pounds of armor (helmet, vest, two weapons) on the way to Afghanistan.” Salazar said.“ When I was on the flight, I looked at other people I was like ‘this is it…here I am…I’m actually doing this.’”

She describes how being on Afghanistan ground was sometimes surreal and testing. One set of her photographs depicts an old Afghan palace with holes from gunshots through the walls, the entire structure left in ruins.

“I always thought to myself, ‘I am here, it’s not a movie. I’m watching and this is the real deal.’” Salazar said. “ There were times where I honestly thought I wouldn’t make it.”

Recently, women, who make up 14 percent of the armed forces, were given equal opportunity to serve with men in combat. Salazar approved of that decision and shared her experience of being a woman in a majority male profession.

“My mom wanted to join the military in the 1970s,” she said. “ But our grandfather was an old World War II vet and was against it. He thought women did not belong in the military, so she never joined.”

Salazar explained when she was working alongside infantry and combat units men were worried about her being at risk. However, proving she could hold her own weight led to their acceptance and respect.

Her father recalls one occurrence where he overheard her holding her ground with another soldier.

“[I was talking to her on the phone], she was walking to the chow hall,” Michael Salazar said. “She said ‘hold on dad,’ and then told someone ‘Don’t you ever touch me again or else’. It turned out a 6-foot tall army private thought it was funny to tap her on the head because of her size. Later on, he apologized. She doesn’t tolerate that.”

From a photography standpoint, Salazar perceives her gender as an advantage. She felt that women were more comfortable around her in comparison to men.

“ I don’t think I would get the same shots if I was a man,” she said. “Women were less at ease when the men were around. Sometimes the women [in Afghanistan] looked at me because it was so culturally different to see a woman in the military and working alongside men.”

Though Salazar is able to carry herself well in the military, her father still worries about her.

“As a parent you worry,” he said. “ Like seeing photos of her up there in the mountains [of Afghanistan]. But she has a fire in her eyes, she doesn’t show fear…I’m so proud of her.”

Salazar joined the Airforce in 2009. (Photo Courtesy of Andrea Salazar)

Bullet holes found in the walls of Queen’s Palace in Afghanistan. 2011 (Photo Courtesy of Andrea Salazar)