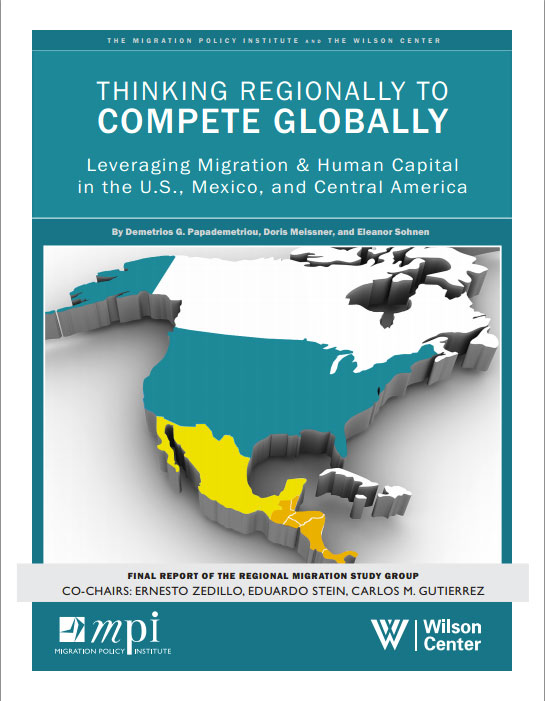 WASHINGTON — Amid powerful demographic, economic and social forces reshaping Mexico and much of Central America and newfound momentum for reform of the U.S. immigration system, the countries of the region have new avenues to improve opportunities for their own people and strengthen regional competitiveness with new collaborative approaches on migration and human-capital development, an influential task force convened by the Migration Policy Institute (MPI) and the Wilson Center concluded in a final report issued today.

The report, Thinking Regionally to Compete Globally: Leveraging Migration & Human Capital in the U.S., Mexico, and Central America, caps a 2 ½-year initiative that focused on extensive consultations with policymakers and civil society in the region; produced more than two dozen research reports, policy briefs and briefing papers; and involved extensive deliberations by Study Group members. The final report offers 14 findings and recommendations for policymakers in the region, some focused on the current U.S. legislative debate, others directed at Mexico and Central America.

The report notes that there have been no systematic conversations about what a regional approach to migration might look like since discussions initiated by Presidents Bush and Fox were derailed by the 9/11 attacks. Yet few issues shape and define the U.S. relationship with Mexico and Central America as much as migration. And with an estimated 14.3 million immigrants from Mexico, El Salvador, Guatemala and Honduras living in the United States – representing more than one-third of the foreign-born population overall and nearly three-quarters of unauthorized immigrants – U.S. immigration policy has significant regional implications.

The Study Group notes that immigration policy is a core sovereignty issue as it defines the parameters for and rules of membership in immigrant-destination countries. The Study Group also looks with great interest at the current U.S. legislative debate for the significant opportunities it offers to improve an antiquated, inflexible U.S. immigration system with an eye to harnessing migration and human capital for the greater benefit of the United States and also for the example it sets and the opportunities it creates for its neighbors to the south.

And indeed, the “neighborhood” has been changing quite decidedly, if unevenly so. Major demographic, economic and social changes are sweeping across Mexico and parts of Central America that are altering the dynamics of the regional migration system and challenging the status quo: slowing population growth, rising educational attainment and growing middle classes in Mexico and El Salvador; expanding economies in Mexico and Guatemala; and, most interestingly, the evolving role of Mexico as a country of immigrant destination. And while the region continues to confront challenges stemming from violence, corruption, informality and still-weak governing institutions, significant steps are being taken that are deepening the rule of law and solidifying further political stability.

“Getting migration and related issues right is vital to the region’s long-term economic growth, prosperity, social order and security — and, in many ways, its competitiveness in a fast-changing, interdependent global economy,’’ said MPI President Demetrios Papademetriou, who convened the Study Group. “The longstanding assumption that the region has an endless supply of less-educated workers headed for the United States is becoming less and less accurate when it comes to Mexico; and in the years ahead, it is also likely to become less accurate first for El Salvador and gradually Guatemala.”

The changes in Mexico, Guatemala and El Salvador are matched by a changed U.S. picture: a labor market and economy still trying to shake off the effects of the 2008 recession as well as enormous and sustained increases in border and interior enforcement. “Net illegal migration from Mexico has been at or near zero since 2007, as has net total immigration from Mexico since 2010,” said MPI Senior Fellow Doris Meissner, a Study Group co-director. “With diminished immigration flows, which most observers expect to persist, there is significant opportunity to reset the relationships the United States has with Mexico and Central America regarding migration.”

Among the Study Group’s findings and recommendations:

“There is a significant opportunity for policymakers in the region to harness the significant changes that are sweeping over the region in a way that encourages broad-based, inclusive growth and maximizes economic competitiveness,” said Study Group Co-Director Andrew Selee, vice president for programs at the Wilson Center.

“Over time, success in building up the region’s human capital would help mitigate today’s concerns about the scope and ‘quality’ of regional migration, while setting the stage for future migration to be more of a genuine choice rather than sheer necessity,” Papademetriou said. “If the Study Group’s vision takes hold, managing continued human mobility in the next decade and beyond will become more akin to administering a shared resource for mutual benefit than continuing to try to stop forces that are in many ways beyond the reach of governments.”

For more on the Study Group’s mission, members and earlier research, visit: www.migrationpolicy.org/regionalstudygroup.

The Migration Policy Institute (MPI) is an independent, non-partisan, non-profit think tank in Washington, DC dedicated to analysis of the movement of people worldwide. MPI provides analysis, development and evaluation of migration and refugee policies at the local, national and international levels.