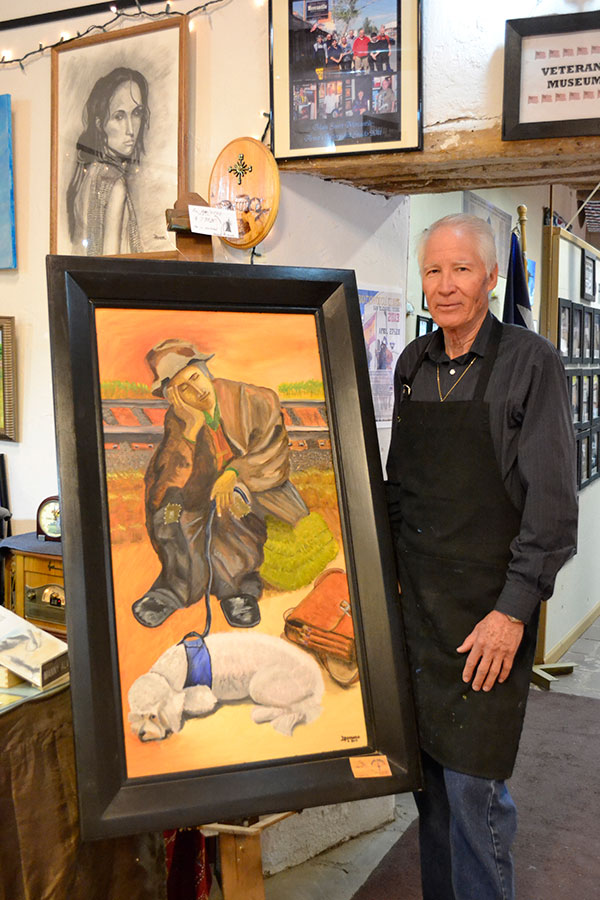 Manuel Alvarado with one of his art pieces at San Eli's art district. (Kimberly Garcia/Borderzine.com)

Outside one of the ancient structures, now an art gallery, Manuel Alvarado, a tall, slender man happily greets curious visitors. “The reason I like San Eli is because it’s calm, not so hectic like a bigger city,” said Alvarado. Manuel Alvarado with one of his art pieces at San Eli's art district. (Kimberly Garcia/Borderzine.com)

San Elizario, or San Eli as it is known to locals, has undergone a change. With the help of local artist Al Borrego, San Elizario has established itself as an art district. Alvarado, a retired Navy serviceman, is just one of many artists whose gallery and studio is housed in one of San Eli’s historic buildings.

“A friend of mine, Al Borrego is the owner of these buildings,” said Alvarado. “He told me about San Eli and that he was going to open some galleries there. It’s been three years and I’ve been here ever since.”

The historic town has drawn many local artists and their studios and galleries to what is now known as the San Elizario Historic Art District. Starting in 2009, the art district has become a must-visit stop on the Mission Trail. The art markets, held every third Sunday of the month, have also attracted many visitors. At the same time, the establishment of the art district has sparked a renewed interest in the history of San Eli.

“I think the artist market is bringing in a lot of tourism to San Eli,” said Eloisa Levario, director of the Los Portales museum and information center. “It’s helping us to make people become more aware of all this history that is here.”

The studios may have given visitors to the historic town a newfound interest, but the history of the town itself is a work of art. The history of San Eli can be dated back to the early 1500’s with the arrival of the Spanish explorers.

“The history of San Eli started way back in 1598 with Juan De Oñate,” said Levario, “he came through this area and settled in the banks of the Rio Grande.”

The First Thanksgiving is not the only interesting event that has taken place in the historic town. Fans of gunslingers of the old west can find the jail that Billy the Kid famously broke into in San Eli, an event that is frequently reenacted.

“Because Billy the Kid had a girlfriend in San Elizario and because his brother in-law was in jail, Billy came up with a scheme to pretend he was a law officer,” explained Fresquez.

The story goes that in the middle of the night, Billy the Kid approached the jail posing as a law officer and pretending he had a prisoner. The officer in charge of the jail opened the door for Kid. “At which point allowing his brother-in-law to escape,” said Fresquez, “making Billy the Kid the first guy to ever break into a jail.”

These reenactments only present a small portion of San Elizario’s rich history. A glimpse into the various art galleries or even a stroll down Main Street reveal many plaques detailing the town’s story. “San Eli has a lot of history,” said Levario, “history that is not being taught in school.”

The old officers quarters and the old walls of the fort for the Presidio, which Fresquez describes as being quite thick, have been recycled and given a new life as art galleries.

“The ruins of the officers quarters are still there,” said Fresquez,  “and now we’re building it into what we really think is going to be like a second Santa Fe, a Mesilla.” Fresquez hopes to see San Elizario thrive to the point in which both the art district and the historic town become a must-see destination for travelers and tourists.

It is this rich history of the buildings and the area that serves as inspiration for Alvarado and his artwork. “The buildings, the way they were made, remind me of where I was born, in a ranch with my grandfather so I feel like I’m in my second home,” said Alvarado.

“I also feel that this area gives me an affinity to do art.”

1521 San Elizario (located across from Chapel)