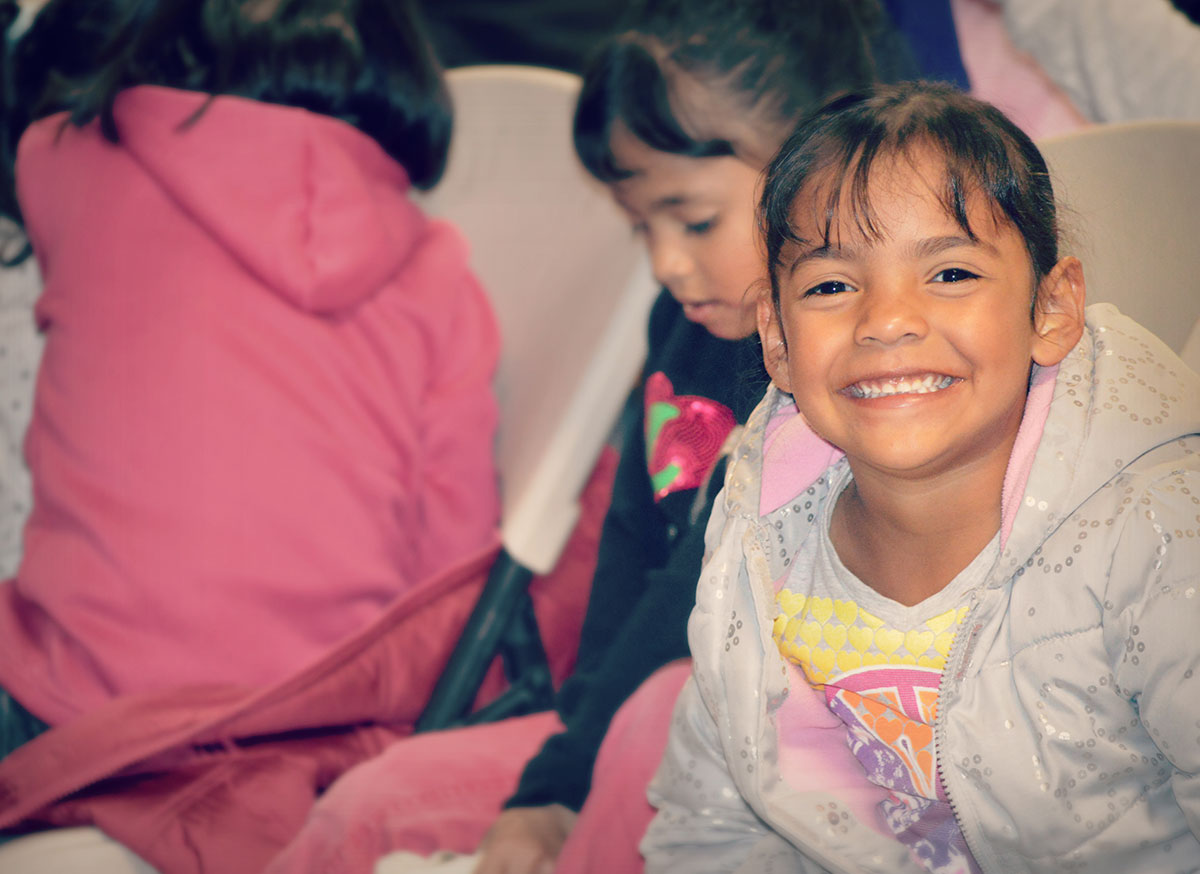 After arriving at the shelter boys and girls experience a transformation. (Natassia Bonyanpur/Borderzine.com)

El Paso – Momentous in stature, the white letters can be seen from each curve of the Rio Grande from the campus of The University of Texas at El Paso.  The tall white coated letters contrast against the opaque, rough terrain of the mountain that encompasses it. The painted words on the Ciudad Juarez’ hillside read, “ La Biblia es la verdad. Léela”.

These words translate to ‘The bible is truth. Read it.’  The letters, which reach an extravagant 13 stories high, were painted by hundreds of religious devotees in 1987 under the direction of Evangelical Pastor Gerardo Bermúdez. After arriving at the shelter boys and girls experience a transformation. (Natassia Bonyanpur/Borderzine.com)

And yet, with all the enigmatic violence that Juarez has endured, the religious instruction embraces the city, hovering amidst the sky, and reminding Juarez of its tight knit religious foundation. The drug war in Mexico, which began in 2007, peaked at over 3000 murders during 2010, but has started to decrease somewhat during the last year.

“The pastors in Juarez have risen up and unified,” said Mary Beth Maifeld, director of Youth With A Mission El Paso-Juarez. “They really pray for the city. Some of them have gone through horrible things.”

Youth with A Mission (YWAM) is a religious charitable organization that operates a shelter and school in Juarez. Beginning in 1981, YWAM marks its 30th year anniversary of providing a safe haven for children, Rancho Los Amigos, in addition to recently opening a school that has already been approved by the Mexico education system. The facility currently houses around 30 children, some of them abused, abandoned or orphaned.

Maifeld, 56, alongside other volunteers of YWAM who live in El Paso, have perpetually risked their lives by venturing across the border during some of the worst violence to replant spiritual faith and come to aid of Juarez’ children.

“We heard gunshots all the time,” Maifeld said. “A body was dumped in our neighborhood. There had been ambush on the other side of our wall when our kids were outside playing but we knew that God had called us there.”

“We take children from four to eight years old and we take them for no less than a year,” Maifeld said. “A lot of homes are just crisis homes that have them for a month. We’re a longer-term home. We give them stability, get them healthy, get them with their grade level and introduce them to the Lord.”

One of the biggest success stories emerging from the Rancho Los Amigos is UTEP Junior Brenda Luna. At age three, her biological mother, who could not care for her, placed her in the hands of the ministry. Now Luna, 22, reflects on the positive path that Maifeld and fellow volunteers anticipate for every single child they take in.

“I went there with my three older brothers because my (biological) mom couldn’t take care of us,” Luna said.  “She was a single parent. We went from living in an abandoned swimming pool to having education, three meals a day, and a roof over our heads. “

Luna also explained how the home not only provided her and her brothers with the physical conditions to survive, but also showed immense love, care and values. Living at the home for 15 years, Luna described Maifeld as her true mother, who nurtured and supported her, even in the most difficult of times. "The bible is truth. Read it." These letters were painted by hundreds of religious devotees in 1987 under the direction of Evangelical Pastor Gerardo Bermúdez. (Natassia Bonyanpu/Borderzine.com)

“Something that my (biological) mom talked about a lot (was) that she did the best thing she could,” Luna said, “It’s not a mother-daughter relationship, but Mary Beth Maifeld is my mom. She took the role of a caretaker. She was there when I needed her, and she was there when I was being rebellious in my teenage years. She was there cheering me on when I finished high school and wanted to go to college and that is what a mother is.”

While Luna is currently in the middle of a successful college career as a Communication major at UTEP, she still can recall the internal struggles she endured while growing up. Luna said she continuously lived with the sadness of her mother leaving her, which often left her with feelings of rejection and abandonment. While living at the shelter, she attended private school, but said she felt different from her classmates. Nonetheless, she eventually realized just what an immense gift being part of the shelter truly was.

“Although I did not belong to a normal family, I belonged to an amazing family of 35 kids and 20 parents,” Luna said. “When I accepted that, I was able to move forward and really dream.”

According to Maifeld, the children’s shelter accepts children who have been abused, abandoned and incredibly malnourished, some so distraught, they do not even voice a single word.

“They come in and you can see the terror across their faces,” she said. “ They don’t know what’s going to happen to them. ‘”

Maifeld explained how after arriving at the shelter these boys and girls experience a transformation, even in a few weeks. Effectively setting boundaries, giving affection and offering the basic provisions of life, they advance from timid and distressed to exhibiting confidence in their studies and with social adjustment. Maifeld recollected on one child, Juliana, age 4.

“We only had her a few weeks,” she said. “Her father came in to talk to me because he was mad. ‘What have you done to my daughter, she is different, what did you do? She is smiling, laughing. She doesn’t do that at home,’ he said. You can tell he was angry because he was so confused he believed this child could not be good. He believed she would always be bad and they treated her like a problem child. We treated her intelligently.”

Maifeld said the little girl later admitted her father had abused her.

“One girl came at eight years old. She wouldn’t talk, eat, and she was terrified. She had an emergency appendectomy and was left at the hospital,” Mailfeld said. “Her parents never went back for her. When we got her it took us five or six days to discover the reason she wasn’t eating was because all of her teeth were infected.”

Maifeld recalled the child’s deafening screams as they drove through the streets of Juarez to take her to a dentist.

Maifeld, often breaking into tears while remembering the stories of abused children who have arrived at the center, explained that helping these children is one of many reasons she continues to work in Juarez.

Maifeld said that drug lords sometimes use manipulation and intimidation to maneuver victims into compliance.

“I think that the cartels use fear and a false hope, “ Maifeld said. “The false hope of money, of having things. Or the fear of ‘you do this or that or we will kill your family.’”

In a country where, according to the 2011 Census, 80 percent of the population belongs to the Catholic faith, Maifeld believes the very essence of spirituality is still found within the people of Juarez, but they find themselves in challenging situations with the grim reality of constant violence surrounding them.

“I don’t think that people lost their faith in God,” Maifeld said. “I just think that they didn’t know… how to turn what they believe into something that they could live. When you’re afraid for your life, that’s where the rubber meets the road.”

YWAM has remained in Juarez, despite the escalation of violence. While the dangerous atmosphere has intensified, the volunteers’ dedication to vulnerable, poverty-stricken children is a strong motivation to continue.

The ranch is situated discretely in the middle of a humble gated Juarez neighborhood.  A sense of tranquility and security is evident behind the gated walls.  Inside the shelter and school, the children, many of them speaking in English, can be seen laughing and smiling. Some approach a visitor eager to show off their desks and knowledge of the Bible.

In more recent news, Juarez, which was once dubbed the most dangerous city in the world, now has dropped to number 19. Maifeld said she has noticed a more relaxed attitude over the last couple of months.

“We’ve prayed for a long time that Juarez will be known as a city of peace and the city of light,” she said. “Were still praying.”

Luna hopes for the best for her hometown. “Juarez is my city, I really hope to see Juarez as the safest city in Mexico, to correlate with El Paso being the number one safest city in the U.S.,” she said.

The sign on the mountain, she says, is an inspiration for all residents to read the bible “to see what God has for me today.”