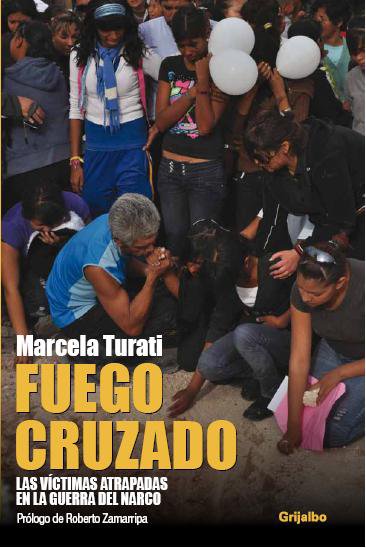 Fuego Cruzado is a collection of stories from victims of the Narco-war that capture the despair of the survivors.

Through her reporting and activism, Mexican journalist Marcela Turati, recipient of the 2013 Lyons Award, is giving voice to those who lack political power and access to the media.

Marcela Turati tried to hide her tears, but the rainy season was still weeks away and teardrops were hard to disguise.

As I approached her, she quickly turned her face, trying to hide her pain. But it was too late. It was May 2011. We stood side by side in Mexico City’s Zócalo square, two journalists fidgeting uncomfortably, trying hard to maintain objectivity amid the agony around us. The relatives of the disappeared—people abducted by Mexican drug gangs and never heard from again—had gathered for their first public protest. They surrounded us. There was no leader that afternoon, no one seemed to be in charge, just thousands of people quietly unfolding posters bearing pictures or simply the names of loved ones. All posed questions without answers. Fuego Cruzado is a collection of stories from victims of the Narco-war that capture the despair of the survivors.

Marcela grabbed me by the arm and took me around the square, pointing to sign after sign, muttering, “Mira, mira, ’ta cabron, ¿no? Está cabrón.” (“Look, look. This is really awful.”)

That afternoon at Zócalo square I came to witness not just the beginning of a victim’s movement, but of a journalist’s long, lonely crusade, a crusade that inspired the Nieman Class of 2013 to present Marcela with the Louis M. Lyons Award, which honors conscience and integrity in journalism by individuals, groups or institutions. Turati was chosen for her coverage of the drug war and her role in protecting and training members of the media. She is a standard-bearer for the journalists who have risked their lives to document the devastating wave of violence in Mexico.

For Marcela, who works for the Mexican newsmagazine Proceso, this is personal. She and her profession have become protagonists in a sad drama. The disappeared include reporters, some of them people she knew, bylines and faces she’d grown accustomed to, all suddenly gone. “Being disappeared, in my mind, is worse than being dead,” she says. “There’s never any closure, much less any peace. You agonize the rest of your life wondering what happened to your loved one. It just tears me apart thinking about it.”

Instead of self-censorship, something many of her colleagues were forced to practice in the aftermath of the drug violence, Marcela went on a crusade to defend freedom of the press. In 2007, she co-founded Periodistas de a Pie (“Journalists On Foot”), a movement of journalists, many of them women based in Mexico City and from the Mexican states most at risk from drug-related violence. These include her native state of Chihuahua as well as Durango, Coahuila, Tamaulipas, Veracruz, Oaxaca and Guerrero.

Periodistas de a Pie started as a journalism network supporting reporters covering issues such as poverty, civic participation, and human rights. But as the war against narcotraffickers intensified, the group refocused to support journalists covering the conflict and to defend freedom of speech. The network began to train journalists in ethics, personal safety, and how to care for their own emotional well-being. And it encouraged more journalists to organize to protect themselves and create strategies to avoid censorship. It also helped connect researchers and international human rights organizations with people on the ground affected by violence. All of its members rally around a single message: Stop silence from falling over the region, from gradually swallowing entire communities like angry shadows.

Mexico today is a nation torn by a quiet, piercing pain that began in 2006 when then President Felipe Calderón declared he would rescue the region from the grip of organized crime. For decades, drug traffickers, with protection from corrupt Mexican authorities, have been smuggling everything from marijuana and methamphetamine to cocaine to the world’s largest consumer market, the United States. Along the way, the cartels grew from an estimated three to more than a dozen today, preying on Mexico’s weak institutions and gradually expanding their power throughout the country, particularly in regions adjacent to the United States.

When the government of Calderón decided to confront them, with help from the U.S. government, the cartels responded with mayhem, including beheadings and hanging corpses from telephone poles and public bridges. These grotesque displays were designed to instill fear throughout communities. Since then, it is estimated that more than 70,000 people have been killed, among them some 70 journalists, and more than 20,000 have disappeared.

“When this war thrust Mexican journalism into the crossfire, Marcela took her calling with the passion and empathy that she brings to every task,” says Javier Garza Ramos, a classmate of Marcela’s at Mexico City’s Universidad Iberoamericana and editor of El Siglo de Torreón, published in Torreón, a city in the northern state of Coahuila that’s been among the hardest hit. “This energy also marks her work as an activist, founding Periodistas de a Pie to give a helping hand to colleagues in need of attention and guidance as the drug war takes a heavy toll on our profession. Marcela brings to her work not only the qualities of a great journalist but also the virtues of a remarkable human being.”

Mexico today is among the most dangerous places in the world to practice journalism. Drug traffickers bully reporters, prohibiting anyone from publishing stories about their corrupt activities by beating them with a paddle, if they are lucky, or silencing them for good, all with impunity. The vast majority of killings in Mexico go unsolved.

“As a journalist who covers Mexico and the border I have seen how the threats and killings have silenced some and forced many of my colleagues to self-censor,” says Angela Kocherga, a U.S. journalist and border bureau chief for Belo, a Texas-based media company. “Periodistas de a Pie gave many journalists their voice back. There is still a lot of work that remains to be done, but Marcela is leading the way.”

They say that in Mexico they kill you twice: Once by dropping your body in acid or blowing your head off with semiautomatic weapons, and then by spreading rumors about you. In this war to control drug distribution routes to the United States, it’s too often the reporter who pays the ultimate price. Marcela won’t allow herself to be intimidated, though, insisting she’s not investigating drug traffickers, but merely making sure the stories of victims aren’t forgotten.

“Being disappeared … is worse than being dead. There’s never any closure, much less any peace. You agonize the rest of your life wondering what happened to your loved one. It just tears me apart thinking about it.”

Marcela’s passion is storytelling, something she discovered as a child when she wrote her first novel and later a play. She was raised in a middle-class family, part of a 1980s generation that dared to reclaim its homeland from the ruling Institutional Revolutionary Party, which operated as an authoritarian regime for more than 70 years until 2000. Her family, led by her father, then a federal congressman for the conservative opposition National Action Party, was politically active. The family would spend weekends at protests and hunger strikes, demanding an end to one-party rule in Mexico. Sometimes, Marcela would stand in front of people and preach change. “I had a complex about poverty,” she says. “I saw need around me and I wanted to do something about it.”

As a teenager, she roamed the Sierra Tarahumara, a mountainous region named after local indigenous people who have kept their traditions and culture alive for more than 400 years. Marcela gave classes in writing and proper language skills to some of the most impoverished people in the country. She considered becoming a psychologist, to teach others how to deal with pain, how to get ahead. At Universidad Iberoamericana, she stumbled onto her destiny, journalism, and fell in love with the power of giving others a voice. She eventually organized groups of journalists to learn from one another or invite guests from countries like Colombia to share their experiences. Newspaper executives viewed her with suspicion, worried she might be forming a union. She simply wanted to improve her profession.

Journalism was a natural fit. She was soon writing stories that moved the country, showing a flair for words and details. In a story, which won a Latin American award, about 14 migrant workers who died crossing the Arizona desert, Marcela begins with three haunting words, “Dry like leaves,” to describe the remains of would-be migrants who had “succumbed to hell. One, desperate, hugged a cactus and stretched his body alongside thorns.”

In one story, Marcela captured the despair of a woman in the state of Tamaulipas who complained that reports about the disappeared, which included her husband, fell on deaf ears: “We’ve been complaining for over a year, but no one listened. It was like speaking from beneath the sea.”

In another article, Marcela displayed her command of detail, capturing the tragedy of Ciudad Juarez, a place she knew well as a child. She begins by describing a handwritten sign penned by a businessman who, tired of discovering bodies outside his office, wrote: “It is prohibited to dump bodies in the trash.” One of the bodies later discovered was that of the man’s own daughter. He never knew this because by then he, too, had been killed.

Marcela worked many of these stories into a book, Fuego Cruzado: Las Víctimas Atrapadas en la Guerra del Narco (“Crossfire: Victims Trapped in the Narco-War”), and traveled across Mexico talking about the horrors that have befallen her homeland. She has also collaborated on several books and multimedia projects that remember the victims of violence and is editor and co-author of Migraciones vemos … Infancias no sabemos (“Migrations Witnessed … Unknown Childhoods”), about the lives of Mexican migrant workers’ children. Entre las cenizas: Historias de vida en tiempo de muerte (“Amid the Ashes: Stories of Life in a Time of Death”), a book she co-edited about Mexicans who have come together to resist the violence, was recently released.

Celebrating her award with grilled octopus and too much mezcal and tequila at a restaurant in the Mexico City neighborhood of La Roma, Marcela says she’s especially proud of this recognition because it means her plight and that of her colleagues is getting international attention. With the award come new responsibilities, something she’s learning to embrace, yet she worries about her lack of English skills.

We unsuccessfully try to figure out the lyrics to Foreigner’s “I Want to Know What Love Is,” which is blaring from the restaurant speakers. Momentarily, we try to escape Mexico’s sad reality and focus on the song because otherwise, she says, “I will start to cry again,” tears of anger and frustration like that afternoon in Zócalo square.

Alfredo Corchado was born in Durango, Mexico and, grew up in California and Texas. He is a 1987 graduate of the University of Texas at El Paso and El Paso Community College. He is a 2009 Nieman Fellow at Harvard University. Mr. Corchado has worked for the Dallas Morning News since 1994. As Mexico Bureau Chief, he covers U.S. policy in Latin America, with a special focus on Mexico. Mr. Corchado has also worked for The News in Cuba and Washington. Before joining The News, Mr. Corchado worked for Public Radio, the Ogden Standard-Examiner in Utah, El Paso Herald-Post and The Wall Street Journal.