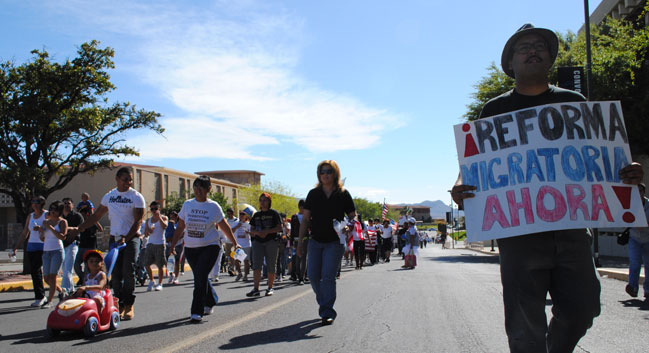 The comprehensive immigration reform proposal spread out Jan. 29 in Las Vegas by President Obama could eventually put as many as 11 million undocumented immigrants, about 80 percent of whom are Hispanic, on a path to U.S. citizenship.

It is could also light up the sky with an awesome display of political fireworks by the Fourth of July.

While Obama’s 25-minute televised speech was seen and heard by millions and then regurgitated and analyzed for days by print as well as broadcast  media, its message was clearly directed to those 535 members of Congress who must sign off before it reaches his desk for signature.

The stakes — the President’s reputation, the future viability of the Republican Party and the welfare of the Hispanic community — are enormous.

Obama’s plan came a day after “the gang of eight” senators — Democrats Charles Schumer of  New York, Dick Durbin of Illinois, Robert Menéndez of New Jersey and Michael Bennet of Colorado  and Republicans Marco Rubio of Florida, Lindsey Graham of South Carolina, and John McCain and Jeff Flake, both of Arizona — introduced theirs. In the president’s framework, a path to citizenship not tied to border enforcement would be included. It would also afford petitioning rights to same-sex couples.

The president offered extra considerations for agribusiness and family reunification, easing sponsorship regulations and raising the annual cap from seven to 15 percent. It would provide an expedited path to “innocent” young people who commit to serve in the military or pursue higher education. The Senate’s plan would do the same for undocumented youth and agricultural workers.

Both proposals emphasize border and workplace security, but the senators make citizenship contingent on stronger border enforcement measures. Immigrants in STEM fields would have an easier visa path. Both plans call for stricter criteria that would include background checks, paying any due taxes and penalties, and learning English for permanent residency.

At a Jan. 30 news conference called by Senate Democratic leadership in which only Senators Schumer and Durbin, along with Senate Majority Leader Harry Reid participated, Schumer responded to a reporter’s question whether citizenship is tied to verification of a “secure border.” He said a “metric” system would be established by the Department of Homeland Security to ascertain when border security guidelines have been met. He added, “Dick and I, and Bob as well as our … Republican friends want to make sure the border is secured but not to use it as a barrier to prevent 11 million from eventually gaining path to citizenship.”

For immigrants who pass initial background checks and pay fines, the Senate’s proposal would grant “lawful probationary status.” Only after those who are “in line” are processed and the border is secure, will immigrants be able to apply for residency. The President’s plan would also provide provisional status, and only after backlogged cases have been processed, could an immigrant apply for permanent residency.

A mandated national employment verification system and more funding of anti-fraud agencies and technology along with exclusion of public benefits while under lawful status are called for in both packages.

Agri-jobs receive priority in both plans, with big business and labor expressing support. U.S. Chamber of Commerce president Tom Donohue unveiled the “Republicans for Immigration” super-pac at the National Press Club earlier this month, stressing that the U.S. economy cannot run without immigrants. “Businesses have millions of job openings that go unfilled,” he said.

At the same news conference, Citigroup chairman Carlos Gutiérrez, who served as Secretary of the Interior under President George W. Bush, pointed out that many U.S. family farms have shut down and some have moved to Mexico because of a shortage of workers.

AFL-CIO President Richard Trumka shared later that a few dozen of the nation’s unions “are undertaking a national campaign to support the 11 million undocumented immigrants. The Senate plan would make visas accessible for immigrants who commit to agricultural jobs.

United Farm Workers president Arturo Rodríguez called both proposals encouraging. He said they recognize the need for agricultural workers, who “sacrifice so much to bring the harvest to our table.” UFW members “are prepared to go out and do the work necessary to ensure a fair and decent process,” he promised.

Obama lauded most elements of the senators’ plan, saying its principles “are very much in agreement with the principles I campaigned on for the last few years”.

Both packages underscore the importance for citizenship, reforming the current legal immigration system and border and workplace security. Julieta Garibay, the United We Dream Educational Empowerment Program coordinator and a DACA recipient says the plans are basically the same, but “we don’t want words. We want actions”.

Many pro-immigrant groups are left wanting for more information after both presentations. Garibey says “we are still waiting on the details of the President’s plan such as how to deal with families being separated and those currently in deportation proceedings.

The time for rigorous debate will come, but what is important is that “the foundation for bipartisan action is already in place,” Obama emphasizes. Wade Henderson, president of The Leadership Conference, acknowledges that there are dozens of concerns still to be addressed “but the president let the people know “the time for reform has come. It set the tone for future discourse.”

The President has clearly warned Congress that if it fails to act in a timely fashion and “vote the right away,” his next step will be to draft a bill himself.

That’s when, for certain, firecrackers will pop all over Capitol Hill and partisan political rockets will ascend and explode across Washington’s sky.