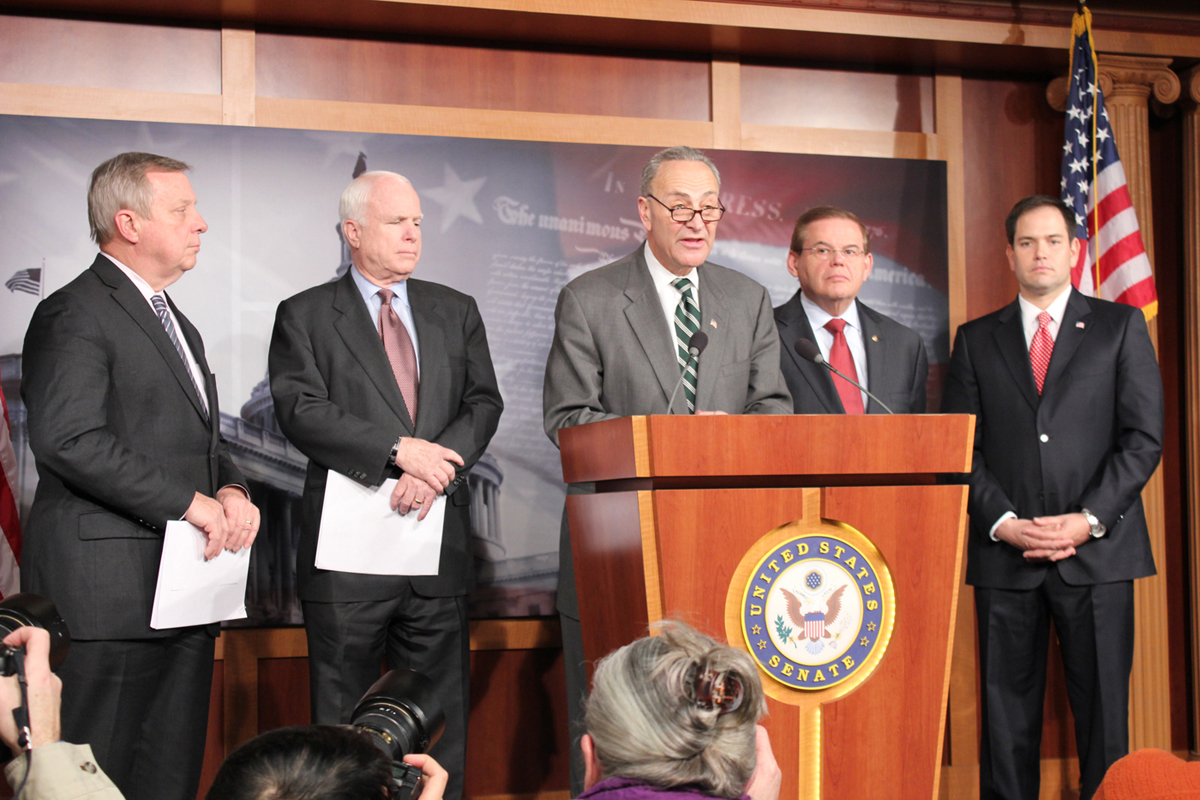 WASHINGTON – Immigration experts who have been pushing for reform  welcome the attention to the issue but say the emphasis on border security and law enforcement are misplaced.

A group of eight bipartisan senators introduced a proposal Monday that is meant to eventually give legal status to undocumented immigrants living in the United States. The proposal also aims to increase border security.

Josiah Heyman, professor and chair of the department of sociology and anthropology at the University of Texas at El Paso, said the overall proposal for reform is necessary and good, but he disagrees with an increase in border security.

“The border enforcement parts are very rhetorical and exaggerated,” Heyman said. “The border is already quite secure, and the border region is safe both in terms of violent crime statistics and also in terms of people’s perception of it.”

Net migration from Mexico into the U.S. fell to zero in 2012, according to the Pew Hispanic Center. The report states that the standstill is the result of the weakened U.S. job and housing construction markets, heightened border enforcement, a rise in deportations, growing dangers associated with illegal border crossings, the long-term decline in Mexico’s birth rates and stronger economic conditions in Mexico.

The Border Network for Human Rights, based in El Paso, a city that borders Ciudad Juárez, Mexico, has been advocating for immigration reform for 15 years, since its inception.

Fernando Garcia, the group’s president, said both the organization and the city welcome and are excited for the new proposal but are concerned about an increase in border enforcement. The proposal states that the government would first ensure that the border is secure before the legalization process of undocumented immigrants begins.

President Barack Obama’s plan on border security is similar to that of the Senate group.

“This is very concerning to us,” Garcia said. “We don’t believe more should be done as far as border enforcement. It’s very ambiguous – it might even not work – and then to link that with the legalization process is very concerning.”

According to the Department of Homeland Security, its 2012 budget supported 21,370 border patrol agents and 21,186 Customs and Border Protection officers, the largest deployment of law enforcement officers in the agency’s history.

“The rhetoric of the proposal is about the immigrants who are already here and who need some form of legal status,” Heyman said. “But the rhetoric is not paying attention to the real threat of security: guns, drugs and money.”

Heyman said ports of entry are what the government should be focusing its attention on to stop the flow of drugs into the U.S., the trafficking of guns into Mexico and the amount of U.S. money that is sent back to Mexico.

“We think that border security has to rely on a legal immigration system that works, and the other way around also,” Mario Lopez, president of the Hispanic Leadership Fund, said.

Lopez said that the increase of border patrol agents over the last few years has played a role in the decrease of illegal crossings into the U.S., and his group is open to the idea of further increasing funds to the DHS. But he said fixing the current legal immigration process should come first.

The Pew report says that 58 percent of the estimated 11.2 million unauthorized immigrants in the U.S. are Mexican.

“Our concern is that border security and family unity is being unfairly linked,” Antonio Ginatta, executive director of the Human Rights Watch, said.

8 thoughts on “Experts: immigration plans place too much emphasis on border security”