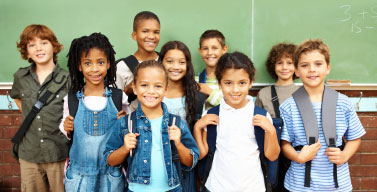 His cell phone rests on the table, the screen completely shattered at the top, nothing seemed wrong as Louis Rodriguez, 28, gives a comforting grin.  Rodriguez is currently unemployed after being dismissed from his job at Dominic’s, an Italian restaurant in central El Paso.  His brown eyes are full of life as they peer through his thick-rimmed glasses.  His speech a little hurried but steady and full of detail.

“I was so bad I made my kindergarten teacher cry,” he said.  “My second grade teacher who was one of my favorite teachers… would tell my mom to give me coffee because my mom didn’t want to get me checked.”  His eyes gaze at the passing cars as he sits outside a local Starbucks, sipping a pumpkin spice latte, as he recalls his difficult childhood experiences.

Rodriguez was diagnosed with attention deficit/hyperactivity disorder (ADHD) when he was 19.  His mother never wanted to believe his teachers who would tell her to get him checked for the disorder throughout his childhood.  He recalls a time in high school when his Academic Decathlon teacher would constantly tell him to be quiet.  He became tired of her admonitions and began drawing.  “She asked me a question and I was drawing and I answered it, so then she asked me another question and I answered it correctly,” he recalls.

Then she said, “Louie! I think we found a solution. I’m just going to let you draw.” He explains that as long as he was focused on one activity then the other part of his brain could pay attention to what someone was saying to him. Nationally, between 3 and 7 percent of school age children have been diagnosed with ADHD, according to the American Psychiatric Institute, although some studies indicate higher rates in some local communities. In addition, statistics from the Centers for Disease Control show that ADHD diagnosis increased an average of 3 percent per year from 1997-2006, and 5.5 percent per year from 2003 to 2007.

Data collected by the National Center for Health Statistics, NCHS, for 2009 and 2010 show an interesting pattern in diagnosis.  In 2009 the highest percentage of diagnosis for ADHD was among whites followed by African Americans.  And in both 2009 and 2010 the data shows lower income families were diagnosed with the illness in a higher percentage than those whose families made more than $60,000 per year.  According to the Centers for Disease Control, the highest percent of children diagnosed with ADD/ADHD by family income was among families making less than $35,000 a year with a diagnosis rate of 12 percent. In 2009 and 2010 the highest diagnosis of children with the disorder was in the Southern U.S., with 9.8 percent in 2009 and 10.5 percent in 2010.

According to William L. Heward, an author who studies exceptional children and special education, children with this disorder can present a challenge to their families, teachers, and classmates.   ADHD is now classified along with attention deficit disorder (ADD) as the same condition, according to the Diagnostic and Statistical Manual of Mental Disorders, (DSM-IV).

Dr. Beverley Argus-Calvo, associate professor in the Educational Psychology and Special Services Department at UTEP, said, “Under federal law for education purposes ADHD per say is not a category of disability. There are many kids diagnosed with ADHD that do not require Special Ed because they’re still learning at the level they should be learning.”

Argus-Calvo believes children are getting diagnosed at higher rates and possibly mistakenly being misdiagnosed.   “It’s controversial in the sense that we’ve see an increase in children diagnosed as ADHD over time,” she said, explaining that behavior problems can begin to appear in bright children who become easily board or tired with what’s going on around them. “As education has become more and more standardized, programs are not being developed that are mentally appropriate,” she said.

At the same time, she does not argue that there are children who need to be diagnosed because they have a very real disease.

Neither would Rodriguez who describes what it is like living with ADHD.   “Flight of thoughts,” he said, explaining what it feels like to have several thoughts running through his mind and not being able to concentrate on just one.  He describes how he sometimes says something and later does not remember saying it, almost as if his speech were independent from his concentration.

He compares his disorder to Tourette’s syndrome, a neuropsychiatric disorder characterized by uncontrollable tics, because he sometimes has trouble controlling his speech.

“I get to the point where I annoy myself, and I say, ‘okay, I’m going to stop talking’ and the next thing I know I’m talking and I have been.”  He also gets frustrated when he stops taking medicine to control the disorder.  Rodriguez started on Ritalin and then tried Strattera, which he says, “didn’t work for him.”  He now takes Concerta, a slow release form of Methylphenidate, and tolerates it better.  “I’ve learned never to hold things in my hand because I will loose stuff, I will just let go.”  He points out his phone as he explains the cracked screen is a result of being careless and dropping it, a typical symptom with people with ADD and ADHD. “As education has become more and more standardized, programs are not being developed that are mentally appropriate,” Dr. Dr. Beverley Argus-Calvo. photo courtesy of www.cdc.gov

Michelle Ribera Mercado, 29, has a 12 year-old son, Devon, who was diagnosed with ADD in fourth grade.  Ribera Mercado describes putting tennis balls under her son’s chair. “What Devon would do is he would like lean back in his chair and then come forward just to hear the noise of the chair touching the floor,” she said.

Devon takes a form of Ritalin much like Rodriguez that is an extended slow release.  He will take a pill before school, which will last him until he gets home, but Devon chooses not to medicate at home unless he feels the need.

“He does have problems focusing, like if we are trying to organize his room I have to constantly be telling him ‘Devon, Devon, Devon,’” explained his mother.  She says her son’s pediatrician diagnosed his ADD based on an assessment by his first grade teacher.  “He gave me questionnaires to take home and then he gave me one to give to the teacher, and he based (the diagnosis) off of that.”  According to Mercado the form asked the teacher to evaluate how long the child could focus on tasks, and if they were easily distracted or frustrated.

She was still not convinced her son suffered from ADD so his diagnosis came later when she took him to a child psychiatrist who observed Devon several times before he confirmed the diagnosis.

It was then difficult for her son to adjust to the prescribed medication.  She said Devon suffered insomnia the first two weeks of taking the medication. On weekends he would stop taking the drug and suffered loss of appetite and stomach pain.  He has since adjusted and now takes it before going to school.

“I concentrate much better and I do stuff better,” says Devon, adding that without the medicine it’s hard for him to focus.

Dr. Helen Hammond, an associate professor in the Educational Psychology and Special Services Department at UTEP, believes that teaching style can have a lot to do with over-diagnosing children with ADD/ADHD.

“Some teachers might be more tolerant of students’ behaviors,” Hammond said. “Other teachers might want to have more order in their classroom… and with those children that go out of that norm maybe they are the teachers that are doing a lot of the referrals.”

Hammond stresses that teachers are not doctors and should not be telling parents that their children need medication. Instead, they should provide a description of the child’s behavior to help diagnose the problem.

“Technically somebody would have to see this (behavior) for at least six months,” said Hammond, adding that for ADD it’s important to observe six types of behaviors: careless mistakes, difficulty paying attention, trouble listening and finishing tasks, easily distracted, disorganized.  Behaviors to look for in children with ADHD include fidgeting, excessive running, talking, not being able to play quietly, trouble with interrupting, and waiting for a turn to speak.  “It’s just got to be significant enough that it stands out… if a child does have it you would be seeing this somewhere at least when they’re four or five,” Hammond said.

Hammond and Calvo agree that children may be getting misdiagnosed with ADD/ADHD more often than they should be and encourage parents to seek professional help if they suspect the disorder in their children.

An appropriate diagnosis and treatment can make all the difference as it has for Rodriguez and Devon who have learned to manage their illness and stay focused and productive.

One thought on “Diagnosing and Treating Attention Disorders: The Importance of Getting it Right”