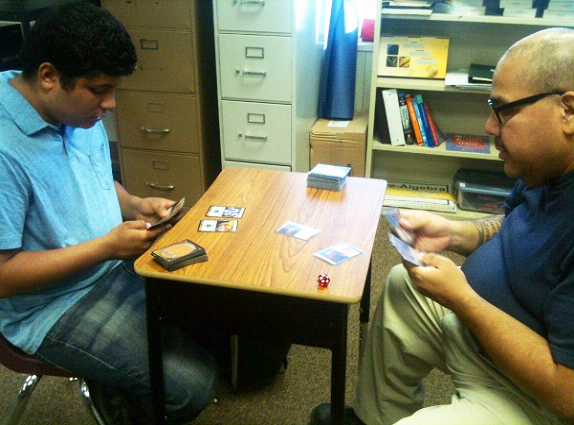 Jovan Rojas, 18, left, plays a card game against video game club tutor John Olivo, 43, on Monday Dec. 3, 2012. The game being played is “Magic: The Gathering,” a card game that pits players against monsters and wizards and teaches mathematical skills. -- Photo by Kevin Iqueda

CALEXICO, Calif.–Jovan Rojas had a lot of trouble making friends on his high school campus. For a lot of adolescents, painful insecurities can be a repellant to their peers. Jovan Rojas, 18, left, plays a card game against video game club tutor John Olivo, 43, on Monday Dec. 3, 2012. The game being played is “Magic: The Gathering,” a card game that pits players against monsters and wizards and teaches mathematical skills. -- Photo by Kevin Iqueda

“I was not very mature and had problems socializing with anyone,” said Rojas, now 18 and a senior at Calexico High School. “After joining the program I have felt improvement in myself and I am told from tutors that I have improved a lot.”

That program, the After School Safety and Enrichment for Teens, or ASSETs, a grant-based project provided under the No Child Left Behind Act of 2001 and administered by California’s 21st Century Community Learning Centers program, was launched at Calexico High in February 2010 with a five-year $1.5 million grant.

ASSETs is aimed at involving latchkey kids, or at-risk teens who have no place to go and nothing to do when that final school bell rings for the day.

“Jovan had few social skills, like interrupting people, or being too shy, when he first joined us as a sophomore,” said Guadalupe Cecena Lopez, the Calexico High ASSETs coordinator. “But I can honestly say that he is a great example of a success story for this program.  He’s one of our stars, and quite a gentleman now.”

In fact, Lopez said, Rojas has taken a leadership role in several aspects of the program, especially in an appreciation of the environment.  “It has helped me learn stuff and gain more friends as well as getting my homework done and socialize more than I ever thought.”

Rojas has been involved in the ASSETs Eco Club, helping to spearhead the planting of organic vegetable gardens on the Calexico High campus, and making 30-mile trips north of here to plant native vegetation at the ailing Salton Sea.

“I love this program,” Rojas said. “I get to do something after school and I feel better about myself since I feel I’ve helped myself improve and helped the environment in some way.”

Statistics by the California chapter of Fight Crime: Invest in Kids reflect that students involved in after-school programs like ASSETs are three times less likely to commit crime, use drugs, or get involved with gangs during that “prime time for juvenile crime” period the organization defines as 2 p.m. to 6 p.m. on school days. “The whole idea is to provide recreational activities for these kids so they can stay busy rather than go out of their homes and get in trouble with the law,” said Ellie Holloway, a Calexico High teacher who was part of the program last year. “Since parents got into the workforce, children were left alone.”  Holloway noted that one of her students two years ago, Stacy Rios, attended the ASSETs karate classes without much enthusiasm and a bit of an attitude.  Rios is today a university student in Arizona, and in a Skype interview said she would like to return to Calexico to help with ASSETs.

Calexico’s ASSETs is a three-tiered program:

One big program success ASSETs boasts is the  “Prom Dress for Less” activity in the spring, teaching students how to gather donated prom outfits and then to give to students who cannot afford the cost of a prom outfit that otherwise might cost hundreds of dollars.  Calexico students have priority, but dresses and suits are available to students from all of the valley’s nearly dozen high schools.

Enthusiasm among ASSETs students isn’t always easily achieved. Lesvia Gutierrez, one of the teachers in charge of after-school library attendance, has seen both the positive and the negative. “We hardly have any kinds of trouble in the program,” said Gutierrez. “The typical problems we encounter are defiance, and it is not tolerated, so it is dealt with accordingly either by removal from the program, or by giving a referral, or a note of misbehavior.”

Kathleen Loza, an English teacher at the high school, said some students who do take advantage of tutoring and homework help at ASSETs don’t always show academic or behavioral improvement

“I have had students who go to the after-school program to complete late or unfinished work but do not show improvement in class or behaviorally,” said Kathleen Loza, an English teacher at the school. That may be due to the mix of students involved in the program.  Some, she says are overachievers who want to be involved in the activities to add to their resumes, and others are those who truly do need tutoring and academic help.

“I think that many teachers here don’t make a big effort to encourage students to attend the program,” Loza said. “[Some] students see this program like a tutoring scenario that their teachers send them to just so they can finish their work and obtain easy extra credit.”

Either way, the program has shown success for all levels of students, Lopez said, and she’s hoping to prove that as she begins the application process next spring for renewal of the 21st Century Learning Centers grant.

“We make it a requirement that they register [for ASSETs] at the start of the school year even if you do not choose to participate,” Lopez said, estimating that more than 3,000 Calexico High students have gone through the ASSETs program in various capacities since 2010.

The success rate, Lopez said, is hard to measure since ASSETs data are combined with the California High School Exit Examination, or CAHSEE, data.  “But, if I were to estimate, I’d say a good 95 percent leave with high hopes and incentive.  They keep coming back.  Give the students an opportunity and they’ll shine.”

I'm just a student in IVC looking forward to becoming a journalist, a cook, and a musician someday. I'm hoping to transfer to CSU San Marcos once i obtain the credits required and obtain my majors there, and hopefully a minor in the Culinary arts. I'm not really social, but i look forward to become social thorugh music and journalism, so far, it's working little by little. I love music, cooking, and writing, which explains my interest for school, and one day i want to make them into a career.