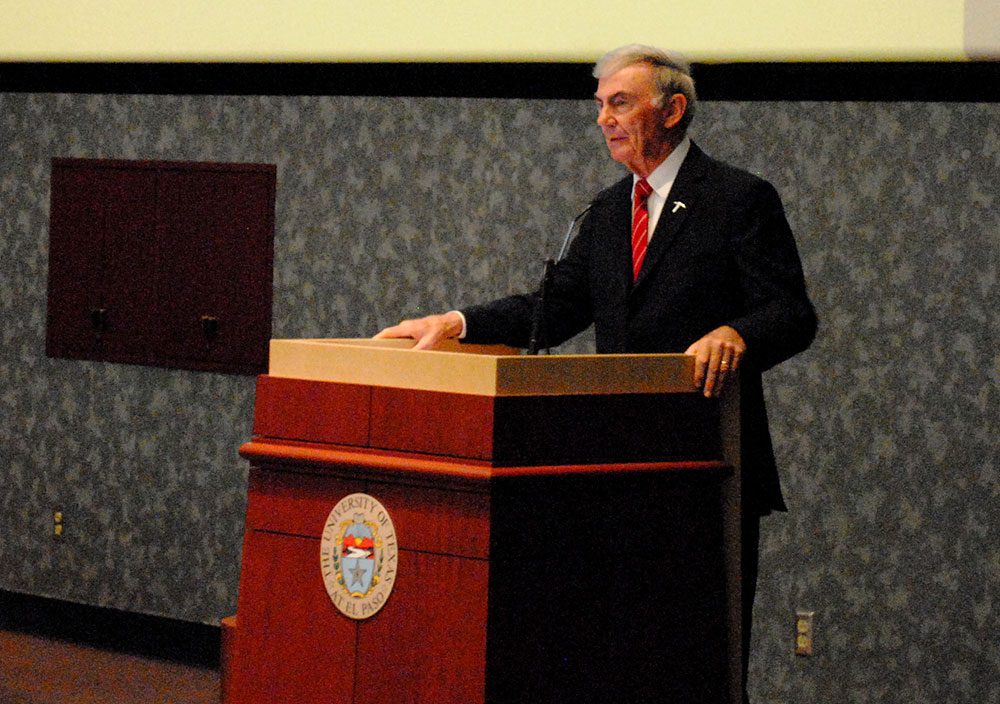 EL PASO – Veteran ABC news reporter Sam Donaldson has covered every national political election since 1964 but he has never seen one as close and as difficult to call as the upcoming contest next week between President Barack Obama and Governor Mitt Romney. “I can’t call this election.  Many times at this point, two weeks before a presidential election you kind of know who is going to win. I don’t know this time,” Donaldson told students at the University of Texas at El Paso October 23.

“It’s been an interesting year,” the former White House correspondent said. He told students that each candidate has flaws, referring to Obama as an “empty suit” during the first debate for which the President was criticized for not speaking out as forcefully on the issues as Romney did.

Donaldson said Romney lacks a connection with some of the voters. “Mitt Romney doesn’t seem to be able to connect with the people who don’t make $100 million a year,” Donaldson said. “Roosevelt had a lot of money for his time and he connected. He felt your pain. John Kennedy had a trust fund worth about $10 million and that was real money in 1960, but he too had a touch that you felt he knew about you.”

Donaldson said that Romney was allowed to catch up to Obama in poll numbers after the first debate. That surge made this presidential election a tighter race than at first.

“Obama decided he would show up as president of the United States and because he was president he would not squabble down here with all these little people running around. The problem with that is when you’re in a knife fight, you bring your knife and you cut,” Donaldson said.

Donaldson said Obama came out looking strong during the second presidential debate and was able to dominate the contest, winning back some voters.

The lecture, titled “Road to the White House,” was part of UTEP’s Centennial Lecture series. Donaldson, one of UTEP’s Distinguished Alums, spoke to a room filled with people who were eager to listen to his insights on the presidential political battle.

“Sam is very much an icon in news broadcasting and is most certainly the face that people associate with ABC news,” Richard Pineda, UTEP professor, said as he introduced Donaldson, who served as chief White House correspondent for ABC News from January 1998 through August 1999. Sam Donaldson signs autographs before his lecture at UTEP on October 23. (Yvette Kurash/Borderzine.com)

During the lecture, Donaldson jokingly revealed his party inclinations during previous elections. “I’ve voted for both Republican and Democratic presidential nominees, plural. Which shows you I have no idea what I stand for,” Donaldson said as the crowd burst into laughter.

UTEP student, Isaac Martinez, said he agrees that the election is going to be a close race, but shared one concern. “I’m just optimistic that it won’t happen again like it did years ago and a state like Florida will decide the overall outcome,” Martinez said.

At the end of the lecture Donaldson said, “You have two different directions you can go and they’re both right about which direction the country needs to go.”