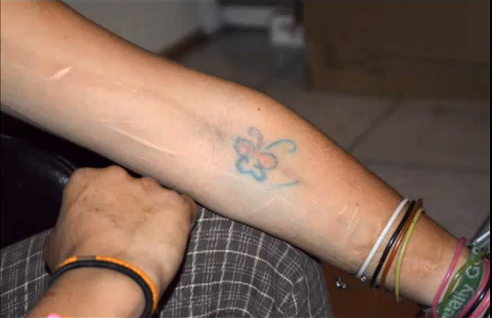 Jackie, a 27-year-old prostitute who has been in the business for only six months. (Shane Hamm/Borderzine.com)

EL PASO – The young woman has a frail frame, thin from a lack of food and an appetite for cocaine, black hair shaved on the sides, two silver rings piercing her bottom lip and tattoos on her arms and legs.

Jackie, a 27-year-old prostitute doesn’t touch the wads of bills folded up on a dresser in a hotel room on Mesa Street. A friend will pick that up before she has sex with the man who made the payment, an average American guy, five-feet-10-inches tall, normal build. Jackie, a 27-year-old prostitute who has been in the business for only six months. (Shane Hamm/Borderzine.com)

He was looking for sex, but she gave him more than that. He also received kind words and support from Jackie, who believes it her job to provide something more to the men who come to her. Sometimes they can’t even imagine what they want to talk about, she says.

“They come for the sex yes, but there is something else,” Jackie said looking down at her arms covered with scars and a tattoo of a butterfly. “The men want something that is not being fulfilled at home, I guess. I feel like they are missing something inside and I’m there to fill it.”

This particular man told her that he had sexual feelings for his stepdaughter and didn’t want to act on them or tell his wife. She says he started crying and she comforted him before they had sex.

This is not an unusual situation for Jackie who has been in the business for only six months. It all started when her best friend and roommate needed money for rent and didn’t have a place to turn. The desperation caused the roommate to sell herself to strange men who were willing to pay her the money she so desperately needed. The money was at first shared. Jackie’s friend Megan, whose initials are permanently inked in Jackie’s left ankle, paid the rent for the both of them and also bought their drugs.

“Eventually I felt bad for my friend paying for everything,” Jackie said glancing at her trembling fingers. “I wanted to pay for things too.” Jackie went into business by posting an escort advertisement on Backpage.com, a website similar to Craigslist that offers classified ads.

Technology has made it easier and easier for these kinds of transactions. Personal ads once sent out on explicitly decorated business cards are now posted online. They state their name and number and give the future “John” a photo or two.

No different than window-shopping for clothes except women are for sale behind the windows and the computer screen acts as a window. Prices range anywhere from $50 to $300 but the advertisements never post prices in dollar amounts using “roses” for dollars. Messages explain that “donations are for companionship only” and promise “no illegal activity.”

When Jackie first posted her ad, the phones calls and texts stormed in.

“My best friend helps me with all the business stuff,” she said. “We do the same for each other. She writes all the numbers down and you try to call or text them all back so you don’t lose business that way. Then she comes with me and handles the money so I don’t have to.”

Before going into business, Jackie was just a young girl struggling to find herself in the world. That world was El Paso. She grew up in the central area with her mom, two sisters, a brother and a stepfather she hated.

“I fucking hate him,” Jackie says, tears rolling down her face. “I wish he would die. He is a monster.”

At the age of 16, Jackie recalls her family living happily until her step dad, offered her and her brother crystal meth, a drug that 11 years later still runs in her veins. After that, she started cutting herself.

“It started in high school when I would cut myself to deal with the pain of my life,” she says rolling up purple argyle socks that hide the wounds. “I can’t let the men see my scars or cuts or else they won’t want me.”

The fresh cut to her leg came after a dispute with Megan. The cuts run along a tattoo of Megan’s initials.

Physical wounds aside, the one’s that plague her mind are the emotional ones left by her step-dad’s abuse, her mothers rejection of her and a number of failed relationships. She broke up with a previous girlfriend who was working on a PhD at UCLA. They were together for eight months, but she couldn’t accept Jackie’s lifestyle.

“I loved that girl,” Jackie said with the tears once again beginning to well up in her eyes. “She deserves better. I hadn’t told her that I was using or prostituting. She found some drug paraphernalia and she dumped me. My heart is very broken.“

After that break-up Jackie’s sadness led her back to El Paso, but not before picking up a guy named Jose who needed a place to stay. They are now dating. He doesn’t have a problem with her job or habits. Jackie does recognize there are clear problems in her life. She desires something better for her life but struggles to find the answers.

“Sex and drugs have ruined all my relationships,” she said. “There has to be more than this life. I know I need to get off drugs and I need to change and stop hurting people. I know I can but I don’t know how.”