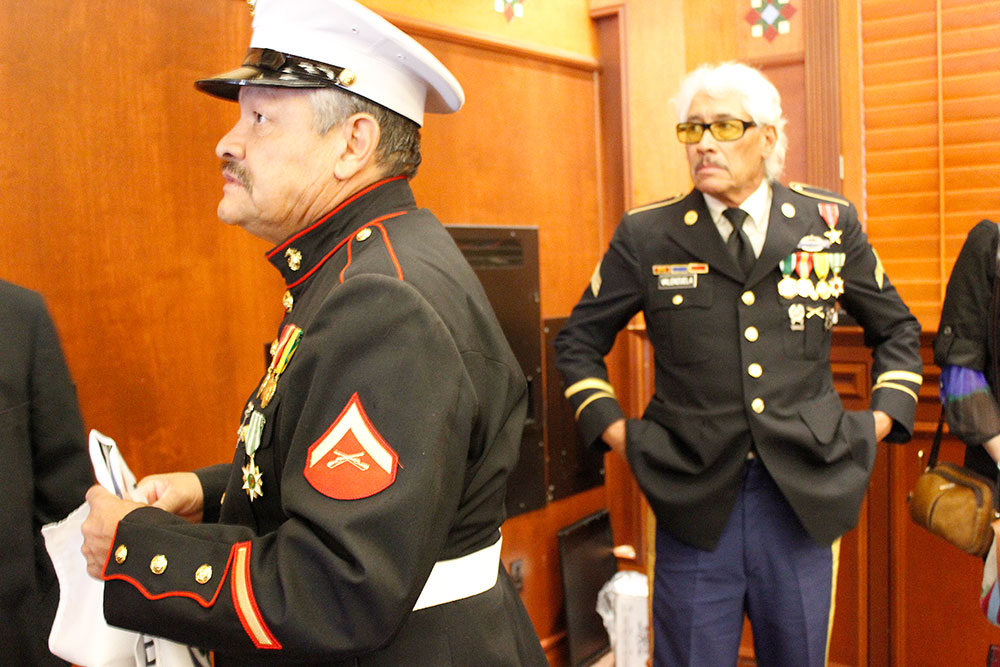 Manuel (left) and Valente Valenzuela wore their uniforms at a recent presentation at UTEP. (Brenda Armendariz/Borderzine,com) Manuel (left) and Valente Valenzuela wore their uniforms at a recent presentation at UTEP. (Brenda Armendariz/Borderzine,com)

EL PASO — Manuel and Valente Valenzuela have been fighting a war all their lives.

The U.S. military veterans fought for America in heavy rain under enemy fire in the Vietnam War but now the country they fought for wants to kick them out.

They wore the Army and Marine uniforms, laced-up their boots, loaded their weapons, and protected the soil they stand on today. Now they are engaged in a different kind of war, defending themselves against their own government in a protracted fight for citizenship and the right to remain in the U.S.

On November 2008, Manuel Valenzuela, an Army veteran, received a removal notice from Homeland Security stating that he was being deported from this country. A few months later in January 2009 his brother Valente, a Marine veteran, received the same notice.

“When I opened the envelope, it just said ‘report of removal of this country,’ and I couldn’t believe it. I thought they made a mistake,” Valente said. The Valenzuela Brothers feel betrayed and embarrassed by the country they served. (Brenda Armendariz/Borderzine.com)

The brothers felt betrayed, embarrassed, and angered. These soldiers who lived the horror of war and suffer from post-traumatic stress disorder and a disease caused by the “Agent Orange” defoliant used in the Vietnam War now face deportation.

As Military men, they took an oath to protect this country at all costs, but now that same country wants to get rid of them. “Who goes after the terrorist? A soldier. We are the ones that dodge the bullets and the bombs,” Manuel said.

They were both born in Mexico, but their mother was a native of New Mexico and they thought they had inherited their mother’s citizenship. But the government disagrees.

Manuel and Valente both faced misdemeanor charges that they say were taken care of immediately so they could stay in the U.S., but federal law would not recognize that them as American citizens. Army and Marine uniforms from the Valenzuela brothers. (Brenda Armendariz/Borderzine.com)

“We have struggled more than you can imagine,” Manuel said. They say that Homeland Security contacted them stating that the agency was not aware of their military status and the fact that they were related.

“You’re ready to throw us away from this country and you don’t even know us,” Manuel said.

Because of the Valenzuela’s recent media presence, many veterans in need of help, some also facing deportation and others already deported, have contacted them.

“All these years we thought we were the only ones dealing with this,” Valente said. According to the brothers, around 3,000 veterans have been deported.

“There’s been veterans banished from this country and if they step in this country they get arrested,” Manuel said, “getting 18 to 20 years in jail for stepping into the country that they fought for.”

These brothers have joined forces once again in hopes of bringing justice to the heroes who risked their lives for the land that now disowns them. For this reason, veterans across the nation have joined in the protest, demanding their right to remain in the country they served and the return of deported veterans.

“We’re not going to stop until we bring them back,” Manuel said.