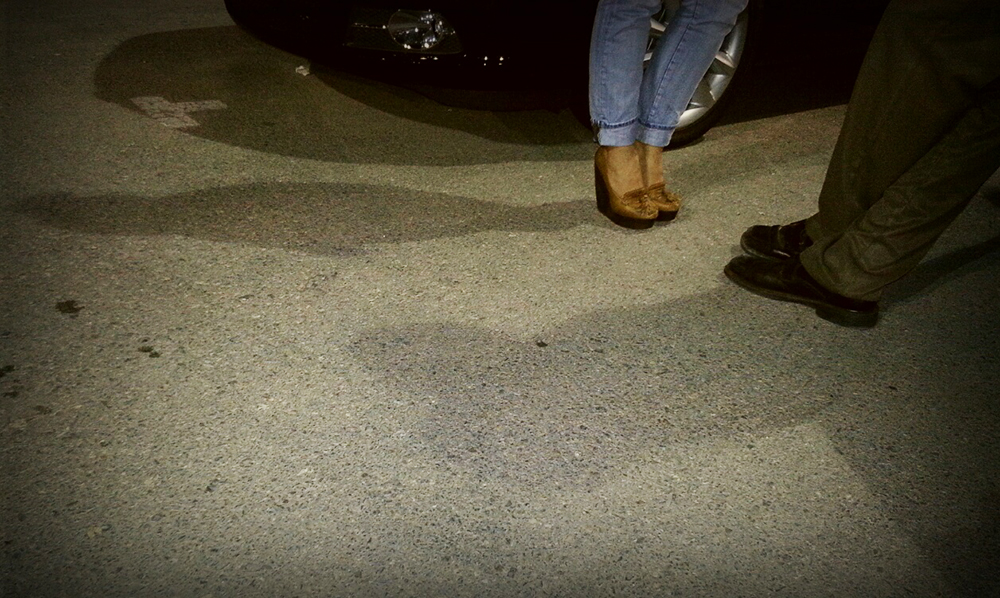 As we exited the bar my friend decided to lean against a stranger’s vehicle and gossip outside. (Illustration by Loreli Hassan/Borderzine.com)

EL PASO – A night out with friends should be a positive experience. This sadly isn’t always the case. We’ve all succumb to peer pressure once or twice in life and have ended up at strange and unknown areas in town. We’ve talked to strangers, some good and some bad. We all have had strange and memorable nights out. In my case, a strange night led to being assaulted at gun-point, turning that fun night out into a memorable one. The one night I wish I didn’t remember.

About a month ago my friend Raul Garcia and I decided to go out for a night of drinks and pool in Central side of town. As we exited the bar my friend decided to lean against a stranger’s vehicle and gossip outside. I remember being agitated and anxious to get in our vehicle and take off. Suddenly, I noticed from the corner of my eye two mysterious men rushing towards us. They were a few feet away and one had his head covered holding a chrome gun and the other followed behind. My heart began to race and I froze. I feared for my life. They pointed the gun directly at us and we obeyed their every command. “Give me your jewelry, give me everything you have!” they demanded. All I could think was, “please just leave.” The two thieves fled the scene with our personal belongings, threatening us not to look at them as they took off. "As we exited the bar my friend decided to lean against a stranger’s vehicle and gossip outside". (Illustration by Loreli Hassan/Borderzine.com)

I can honestly say this has been the most frightening thing I have ever endured. Therefore, I have been inspired to share my story and advice those who come across this unexpected anguish that we have a great support system behind law enforcement teams in our city. They dedicate themselves to long and exhausting hours to protect El Paso’s residents, attempting to solve each case.

In the course of 2012 there have been about 161 cases of aggravated robbery reported in the El Paso region. In 2011, the total was 204 reported cases, according to Detective David Flores from the El Paso Police Department. As one of the safest cities in the United States, he said it is uncommon for an armed robbery to occur in our city and that a high number of reported cases have been solved.

“I don’t get these types of cases often, but most robbery cases are assigned to regional detectives as they are reported. Armed robberies are primarily assigned to the unit I am in called Crimes Against Persons,” Flores said.

Many of the police department detectives work very close with the patrol and tactical officers in every region, who are also the first to respond when a call is made. The officer’s quick responses could also help catch the offenders faster.

“These officers do an excellent job of preparing the case for us to investigate,” Flores said. “Many times evidence can be lost if the initial responding officer is not thorough in his investigation.”

With rigorous work hours, Detective Flores’ team also works closely with other agencies to compare notes and crime trends on active and ongoing investigations to help identify the offenders. They work closely with the public and the media to get the word out, not only for the public’s safety, but to get someone who can provide information on a case.

Getting the word out fast proved to be helpful in our case. A few moments after we were assaulted, a bar owner nearby was also attacked by the same two men. He was able to identify one of men and reported it to the police immediately. The following day police officers had surveillance at the home of one of the attackers.

Deputy Sheriff, Angelica Becerra, works and keeps ties with the police department on an everyday basis.

“Most criminals do not stay in one area, so there is always that connection to obtain more information on any investigation,” Becerra said.

The deputy sheriff task forces are made up of officers from different agencies and team up with the police department in various cases. These officers are also prepared with special training to deal with crimes against persons, according to Becerra.

“While we interview the victim, we always show sympathy, especially in the most sensitive cases, such as assault,” said Becerra.

Many victims suffer a physical injury during these assaults and, on top of that, they have to deal with emotional trauma as well. Victims are usually referred to assistance programs provided by the city to help those victims who need it. However, it’s not always easy helping those who have been assaulted.

“The most difficult thing about working these types of cases is seeing victims who have been hurt during a crime. Many of them suffer some type of physical injury that disables them to work, go to school or any other activity they did on a regular basis,” said Flores.

As for myself, the third eye behind my head has been triggered. Not am I more aware of my surroundings at all times since the assault, but I do everything possible to protect myself and prevent this incident from happening again. My experience has led me to believe that anything can happen, even when it’s least expected. You can’t trust anyone and we must be cautious of the things we do, who we’re with and which places we visit.

Garcia, who was with me during the assault, said he is amazed with the help and support provided by our police department and detectives. He said the cops responded to his call and began gathering information faster than he expected, but would like to be brought up to date on the current case.

Like most victims, this event has also been a learning experience for him.

“I’m more aware of my surroundings and I don’t really carry as much cash with me like I used to. I try to avoid making myself a target for robbery by being more cautious of where I am and what I do,” Garcia said. “I want to tell everyone to be careful when they go out because this can happen to whomever.”

Anyone could be a victim of a crime and thanks to our well- trained teams, they strive to create a safer city and help those who need it. Luckily for us, no one was hurt during the robbery and so far, I have been able to identify one of the attackers. The other one still needs to be recognized. We were able to retrieve some of our belongings and are planning on pressing charges against the two aggressors.