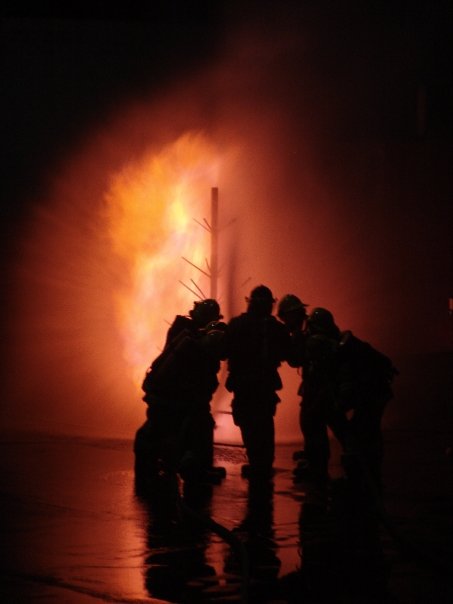 EL PASO – When I was younger, my dad would smoke his Marlboro’s outside in the porch and I remember always playing with his lighter. Once I figured out how to turn the wheel fast enough so that sparks came out, I was hooked.

One of my most treasured memories is the day I tried on my uncle’s firefighter gear. Even though I was only 11 years old and I knew I could get in trouble, at that moment I knew what I wanted to do with my life. That day I decided I was going to become a firefighter.

My family wasn’t pleased with my plans and my dad insisted on me graduating from college. Because of this, I decided to pursue a journalism career instead of trying out for the city’s fire department. I felt like I was making a mistake, but I knew graduating college would help me in the future and, of course, it would make my parents proud. But like the old saying goes “Old flames never die,” and my dreams of becoming a firefighter were never lost. Most people get annoyed when they see flashing lights in their rear view mirror and have to pull over. But no matter where I am, when I see a fire truck, I have to pull out my phone and take a photo. If you could see my face in the reflection of the shiny chrome in the truck, all you would see is a smile and my heart beating out of my chest. Seeing red never made someone more excited.

Ironically, studying to become a reporter led me to the firefighter world. One day I had to cover a story about the largest firefighter academy in El Paso. I was very excited to be around the firefighters and trucks and couldn’t help but ask a million questions. A training officer noticed my enthusiasm and asked why I was so interested and I told him, “This was my dream.” He then suggested for me to become a volunteer. It had never crossed my mind, but it was perfect.

I went home and told my dad the news of being able to enjoy the best of both worlds, hoping he’d be happy for me. I would continue my career as a journalist but volunteer as a firefighter on my downtime.

“Oh, so now you are gonna die for free?” my father asked.

You can’t imagine how happy becoming a volunteer firefighter made me. Me during a SCBA training with the SCBA mask on. (Photo courtesy of Pink Rivera.)

I immediately fell into the firehouse traditions and instantly gained an extended family. Being around the trucks, the gear, the equipment and my brothers and sisters was better than any fantasy coming true. There’s no better feeling in the world than knowing you belong somewhere. Going to calls and helping people made me complete and made me realize what I was born to do.

Sitting in class, standing behind a cash register, writing a story on a computer- none of these things compared to the charge of verve I got rushing to help someone…until I went to my first fire.

Rolling up to my first fire was like seeing in color for the first time.

Adrenaline doesn’t even begin to describe the surge of feelings I got when I was told that I would be going inside a burning house. I would no longer be a spectator standing behind the yellow caution tape.

I put my suit on, then my mask and tank and ran to my brothers ready to help in any way I could. Even though we had trained and done these things every week all year, I was still a lost little rookie all over again.

I found myself holding back that goofy smile under my mask and wanting to pinch myself under the multiple layers of fire retardant clothing. After only a few seconds, beads of sweat began running down my eyelid and I felt the heat under my feet coming through my boots.

I was suffocating, although a tank of air was connected directly to my mouth.

I began to panic and get extremely uncomfortable.

I wasn’t sure how much more I could stand; I literally couldn’t catch my breath. It was like carrying a refrigerator on my back while mountain climbing into the back of a gigantic oven.

Then I felt a tap on my shoulder indicating it was time to switch with my partner. I couldn’t have been more relieved.

After we were done cleaning up and on our way back to the station, all I wanted was to get rid of my sweat-drenched clothes and a cold shower. But as I got down from my high I realized that even though I was exhausted and every muscle in my body was aching, I wanted more.

I was addicted and life was never going to be the same for me.

I stayed up that night wondering how the fire had started. Why fire is used as a weapon that doesn’t need anything to live? Yes, live. Fire is a living, breathing life form that can grow and get out of control, killing anything in its path.

I was too young to know it at 11, but now at 23 I can see how fire is part of my calling. Not only did it lead me to a fulfilling career and lifestyle, but it also introduced me to my future husband. We even decided to get married at the fire station and on the fire truck to celebrate how we met and everything we had been through together.

All the pieces began to fit together. Now I also understand that the journalism skills that I have acquired will help me investigate and solve arson cases. Cases that have left people hurt, confused and abandoned after losing everything they owned. I can interview people, research hard to find information, obtain legal documents, observe small details and get to the bottom of every story.

When I played with my dad’s lighters, flick after flick, watching the half inch blue flame burn away, I asked everyone around me how it worked and no one could give me an answer.

I know soon I’ll be able to answer all these questions.

SCBA tanks at the fire station. (Photo by Pink Rivera.)

My husband took this photo of me right after I got my gear for the first time. (Photo courtesy of Pink Rivera.)

My husband (Sergio) and me on our wedding day. (Photo by Fernie Castillo and Mark Lambie.)

Me covering a story on the El Paso Fire Department. They let me stand on truck and the PIO took a photo of me. (Photo by John Concha.)

Me during a SCBA training with the SCBA mask on. (Photo courtesy of Pink Rivera.)

Me after a live fire training. (Photo by Alex Miranda.)

Me during training on forcible entry and how to use a K-Tool in 2009. (Photo courtesy of Pink Rivera.)

My dad (Arturo) walking me down the driveway on my wedding day, February 14, 2010. (Photo by Fernie Castillo and Mark Lambie.)

My husband (Sergio) and me on our wedding day. (Photo by Fernie Castillo and Mark Lambie.)

Me and my favorite fire truck at Clint Fire Department. (Photo courtesy of Pink Rivera.)

Our first kiss as husband and wife on February 14, 2010. (Photo by Fernie Castillo and Mark Lambie.)

Me in yellow helmet and my husband in red helmet at a house fire in Fabens, TX. (Photo by Alex Miranda.)

A brush fire in Clint, TX caused by lightning. (Photo by Pink Rivera.)

Fire hoses at the fire station. (Photo by Pink Rivera.)

Equipment on a fire truck. (Photo by Pink Rivera.)

One of my many fire truck photos taken at a red light in Central El Paso. Photo by Pink Rivera.

Me in yellow helmet and my husband in red helmet at a house fire in Fabens, TX. (Photo by Alex Miranda.)

2 thoughts on “Fire has always fascinated me”