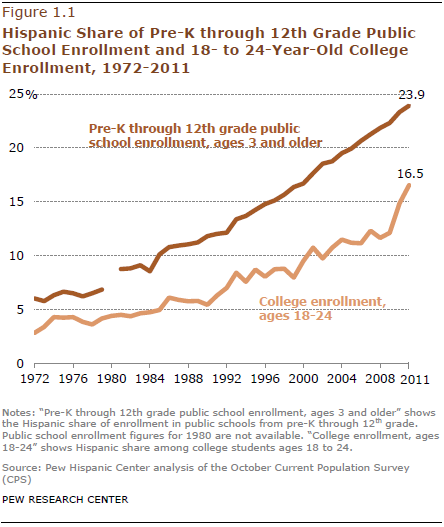 WASHINGTON – Hispanics are now, for the first time, the largest minority group among the nation’s four-year college and university students, with the number of 18- to 24-year-old Hispanics enrolled in college exceeding 2 million, reaching a record 16.5% share of all college enrollments. As their growth among all college-age students continues to outpace other groups, Hispanics also made up one-quarter (25.2%) of 18- to 24-year-old students enrolled in two-year colleges, according to an analysis of newly available U.S. Census Bureau data by the Pew Hispanic Center, a project of the Pew Research Center.

The new milestones reflect a number of continuing upward trends. Between 1972 and 2011, the Latino share of 18- to 24-year-old college students steadily grew—rising from 2.9% to 16.5%. During the same period, among all public school students, the Latino share grew from 6.0% to 23.9%. In both cases, rapid Latino population growth has played a role in driving Latino student enrollment gains over the past four decades.

However, population growth alone does not explain all the enrollment gains made by Hispanic students in recent years. Today, with the high school completion rate among young Hispanics at a new high, more young Hispanics than ever are eligible to attend college.

According to the Pew Hispanic analysis, 76.3% of all Hispanics ages 18 to 24 had a high school diploma or a General Educational Development (GED) degree in 2011, up from 72.8% in 2010. And among these high school completers, a record share—nearly half (45.6%)—is enrolled in two-year or four-year colleges. Both demographic trends and greater eligibility have contributed to growth in the number of Hispanic young people enrolled in college in recent years.

In addition to gains in enrollment, the number of degrees conferred on Latino college students has also reached new highs.

In 2010, the number of Latinos who received a bachelor’s degree reached a record 140,000 recipients, according to data published by the National Center for Education Statistics of the U.S. Department of Education. A record number of associate degrees were awarded to Latinos in 2010 as well—112,000. In both cases, Latinos are a growing share of all degree recipients—13.2% among those with an associate degree and 8.5% among those who received a bachelor’s degree in 2010. Despite these gains, the Latino share among degree recipients significantly lagged their share among 18- to 24-year-old students enrolled in two-year colleges (21.7%) and four-year colleges and universities (11.7%) in 2010.

Hispanics are the nation’s largest minority group, making up more than 50 million people, or about 16.5% of the U.S. population. Among the 30 million young people ages 18 to 24, 6 million, or 20%, are Hispanics.