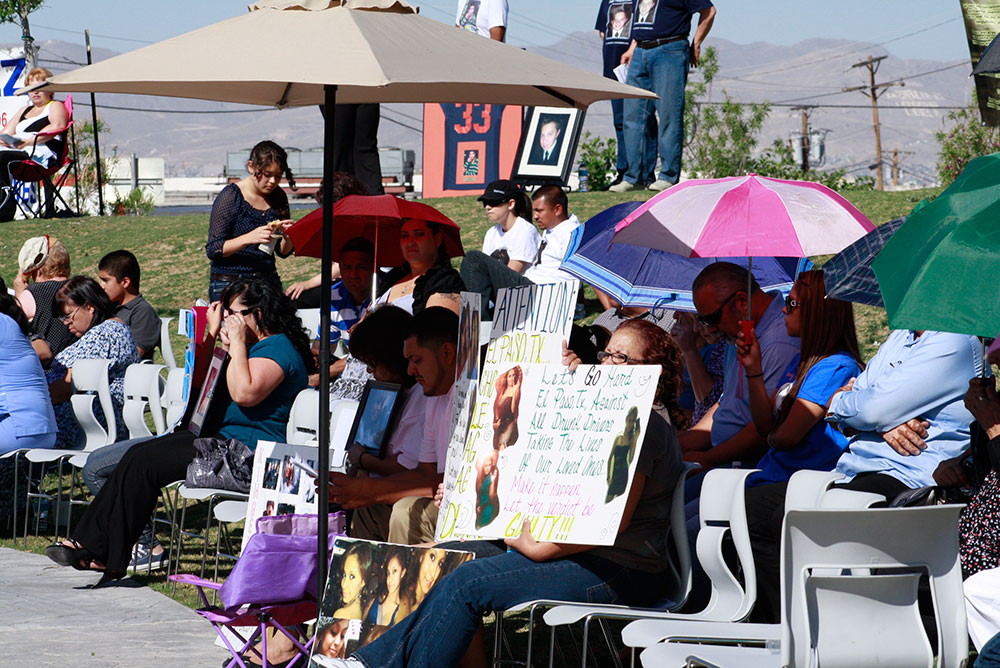 Hundreds of friends and family of victims of violent crime gather in Yucca Park at the annual reading of more than 1,500 names engraved into the memorials granite walls. They mourn and some demand attention to the crimes that are “taking the lives of our loved ones,” as one of the signs reads in the center of this picture. (Danya P. Hernandez / Borderzine) Hundreds of friends and family of victims of violent crime gather in Yucca Park at the annual reading of more than 1,500 names engraved into the memorials granite walls. They mourn and some demand attention to the crimes that are “taking the lives of our loved ones,” as one of the signs reads in the center of this picture. (Danya P. Hernandez / Borderzine)

EL PASO — In El Paso’s Lower Valley four granite disks hold the names of more than 1,500 victims of violent crime, a memorial linking the shattered lives of thousands who have witnessed how this city is not as safe as everyone believes.

This year 67 names were added to the wall, 15 of them killed by a drunk driver. This statistic is not being factored in when El Paso is ranked one of the safest cities in the United States every year by the CQ press, an independent publisher of a book titled City Crime Rankings.

“Every day, I listen to the news. I hear the radio. I read the newspaper, and there is not one or two weeks that go by without a tragedy related to drinking and driving,” said Connie Gonzalez, an Anthony resident whose 22-year-old daughter was killed by a drunk driver in 2009. “Then they’re going to stand there and say that we are the safest, but we are not.”

Before her daughter’s death, Gonzalez, 49, worked as a probation officer, but was unable to deal with repeated DWI offenders every day. Today she works as a victim advocate for the District Attorney’s office, where she helps victims, like herself, that live in the shadow of El Paso’s reputable low crime rates.

For more than a decade El Paso has been the safest city in the mouths of news media outlets, government officials, law enforcement agents and citizens who are unaware that El Paso’s violent crime rate is currently higher than the national average.

In fact, the FBI warns against any ranking that compares safety from one city to another because they ignore geographic, demographic factors and cultural, educational, recreational or religious characteristics affecting crime rates.

In April, during the annual name reading at the Crime Victims Memorial, Mayor Cook continued to promote El Paso’s crime ranking published by the CQ Press.

“We are very proud that El Paso comes out in the top rankings on safest cities,” Cook said. “Those rankings are based on the FBI statistics on violent crime.”

Although Cook mentioned that these rankings are based on FBI statistics, they are outdated and incomplete. The CQ Press, bases its rankings on a Crime Index which dates back to 1960 and only combines the eight main offense categories: murder, rape, robbery, aggravated assault, burglary, larceny-theft, motor vehicle theft and arson. Instead, the FBI bases their reported crime rates on the yearly Uniform Crime Report. This report uses 22 categories, made up of 46 specific crimes including arrests which are not part of the discontinued Crime Index.

In its methodology section, the CQ Press acknowledges that it is using outdated reporting methods.

“While the FBI concludes how it will replace the Crime Index, City Crime Rankings continues to provide total crime numbers, rates and trends for U.S. cities and metropolitan areas as a service to readers,” states the CQ Press 2011 – 2012 Crime Rankings book.

The CQ Press continues to publish their controversial book despite various uproars including a 2010 press release where Houston Mayor Annise D. Parker, Chair of the U.S. Conference of Mayors Criminal and Social Justice Committee said:

“These rankings represent a gross misuse of FBI data. Everyone with the slightest knowledge of this issue knows the rankings are not credible, but the publication persists with them, presumably because rankings are popular and sell books.”

Deaths not being factored in

In a international border region where weapon smuggling and drug related crimes are a concern, annual Reports by The El Paso Police Department exclude analysis of crimes such as weapon violations, drug seizures, or anything related to traffic accidents or driving while intoxicated.

Mayor Cook is aware that FBI statistics used by the CQ Press to rank El Paso are excluding deaths caused by drunk drivers, victims whose names are forever engraved on the memorials black granite walls.

“Most of the crime that you see here today is what a lot of people don’t think of as a violent crime, which is victims of drunk driving.” said Cook referring to the hundreds of victim’s names on the wall. “I personally think it is.”

The memorial is quickly running out of space. Today it is still the most prominent place where the public can see the real magnitude of El Paso’s violent crime which is actually higher than the national average, something most citizens are overlooking because of the focus on positive trends.

The 2011 EPPD annual report fails to mention the 2,719 DUI arrests and 3,009 alcohol related traffic accidents in El Paso County. This is important information for drivers that live in a city were 92 percent of workers commute daily using a car, truck or van according to a 2009 study by the Center for Neighborhood Technology.

The EPPD reports a total of eight manslaughters from 2001 to 2010 a number that Gonzales said is low because law enforcement is not being tough enough on drunk drivers.

The drunk driver who ran over her daughter as she crossed Lee Trevino in October of 2009 is still free.

“It hasn’t gone to trial yet. It has been three years and it’s reset after reset after reset,” Gonzalez said. “While he is with his family enjoying the holidays, there’s always an empty chair in our family.”