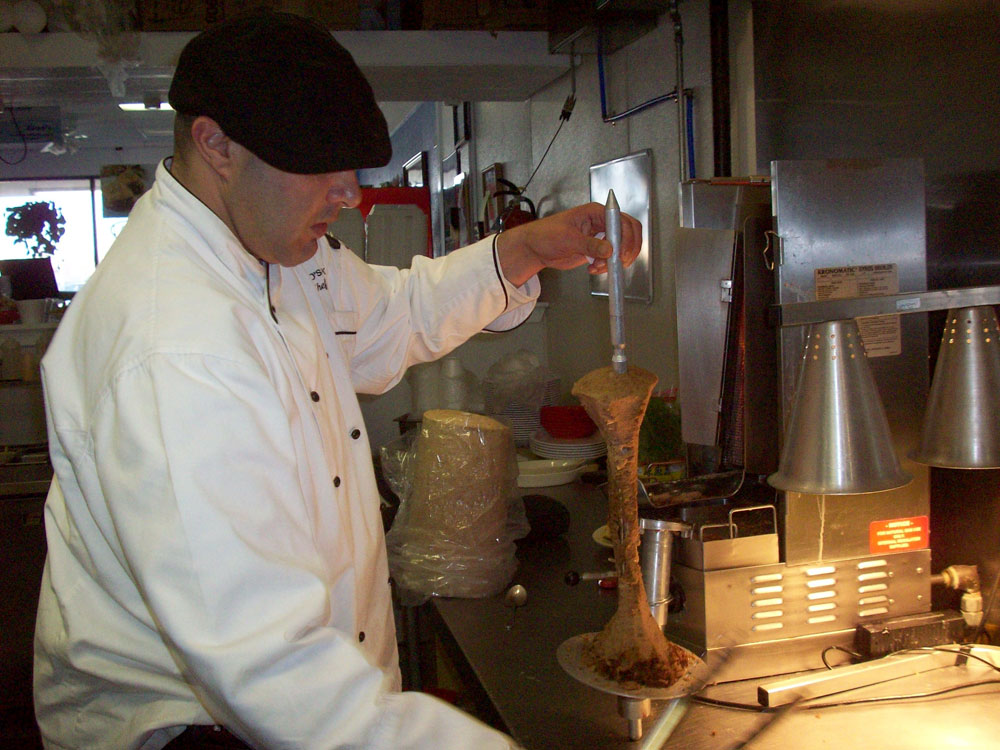 Zino Souikni carving meat for gyros at his restaurant in the West side of El Paso. (Anoushka Valodya/Borderzine.com) Zino Souikni carving meat for gyros at his restaurant in the West side of El Paso. (Anoushka Valodya/Borderzine.com)

EL PASO – Local restaurant owner Zino Souikni is proud to be Greek but he’s glad he doesn’t live in his home country, which is still reeling from a nearly fatal debt crisis and years of recession.

“It’s too expensive,” he said. Souikni, 45, owns Zino’s Greek and Mediterranean Cuisine restaurant in West El Paso. He says that he talks to his family every now and then to see how they’re doing economically and spiritually. “When people are laid off, they tend to drink more, which can lead to more crime because they have no income,” said Oscar Varela, professor of finance. “It doesn’t excuse crime, but people are so disgusted with the entire situation that they want retribution by destroying property.”

Souikni’s wife, Jody Kotys, travelled to Greece where she met her husband in the summer of 2003. “Greece was a dream travel destination especially for Americans because it was beautiful and cheap,” she said. “That’s not the case anymore.”

Eurozone finance leaders and the International Monetary Fund agreed in March to bail out Greece with the equivalent of $173 billion lasting from this year to 2014. Two years ago Greece received another bailout for $146.2 billion, which was to last for three years.

“I don’t think the bailout will help because the Greeks are still paying,” Souikni said. It’s going to take years for the bailout, so the government is going to keep taking money from regular people’s paychecks.”

As a stipulation for these bailouts, the government of Greece had to implement wage cuts and tax increases. According to the embassy of Greece in Washington D.C., those receiving pensions and people working in the public sector have been seeing 10 percent to 30 percent cuts in their paychecks in the past two years, not including increases in income tax.

“The reason is that the government had to reduce its expenses in order to control its budget deficit,” said a press attaché at the embassy.

Souikni said that his 76-year-old retired father is one of those affected financially.

His father, who retired at the age of 50, worked in agriculture for 30 years. Fortunately, his home is paid off, but he still pays property taxes among other expenses. A comparison of the cost of living between El Paso and Greece. (Anoushka Valodya/Borderzine.com)

The official retirement age in Greece is 65 with pensions based on the earnings of a person’s last five working years.

According to the international Organization for Economic Co-operation and Development (OECD), “in 2005, Greece’s pension expenditures at 11.5 percent of GDP were among the highest in the OECD, against an average of 7.2 percent” among 34 member countries.

Souikni said that he was working as a cook in Greece, earning 10,000 drachmas a day (about 30 euros). When the euro replaced the drachma as Greece’s currency at the exchange rate of 1 euro to 340 drachmas, Souikni’s salary diminished significantly. His rent doubled with the euro.

“That’s why I left Greece in the first place. Everything became expensive, but your income would stay the same. Under the drachma, life was 10 thousand times better,” Souikni said.

In 2003, Souikni left his home country for better financial opportunities. He graduated from Las Vegas, Nevada’s Le Cordon Bleu Culinary Institute. Four years later he followed his wife to El Paso, making it his home. After teaching culinary arts at a couple of local learning institutes for a few years, Souikni opened his restaurant in 2011.

Kotys said that she and her husband send his family money on a regular basis.

“The money we send covers their basic living costs,” she said. “They don’t make that much money to begin with.” Souikni said that his family in Greece budget its money by cutting down on restaurant outings. Before the crisis, his family of 10 would eat out a few times a week. Now, he said, they can only afford to go out once a month.

“To boost competitiveness and employment the minimum wage … was recently reduced by 22 percent with a further 10 percent for young employees below the age of 25,” said the press attaché of the embassy.

“What you have here is unfortunately governments acting financially irresponsible and incompetent in running big budget deficits that ultimately,” Varela said, “costs a lot of members of society, which is unnecessary if governments would learn to live within their means in the first place.”

Varela said that Greece is on the right track to implement austerity cuts.

“These problems are not going to go away,” he said. “Economics is based on reality, and Greece is doing what’s required to regain its footing.”

If Greece’s recovery becomes unsuccessful, then America may have something to worry about, Varela said.

“Any instability that happens to the European Union will have tremendous repercussions internationally insofar as markets and the values of securities because the United States and Europe are major trading partners,” he said. “This could create a contagion effect from one market to the other that can pull down markets internationally.”

Souikni said that most likely he would go back to live in Greece if the currency changes back to the drachma, but Varela said that the drachma should remain obsolete.

“The Greek economy is dependent on international trade flow. If they can maintain an open economy and fiscal discipline, then they should last long,” Varela said.

“Greeks have been very resourceful for thousands of years,” Kotys said, “and they’re very lovely.”

Greece is now grappling with a divided government after the recent election as political parties attempt to form a coalition. Meanwhile, elected officials who are against the bailout are trying to appeal to European Union finance leaders to remove austerity measures of wage cuts and high taxes, which is a stipulation for the bailouts.

Jeff Keckley, travel consultant for Travel Del Sol, said that even though Greece is hurting for money, tourists should not get their hopes up.

“We haven’t seen any unusual deals and we don’t expect to because Greece is under the euro,” he said. “If it was under the drachma, then hotel prices can go up or down more easily, but the euro currency has prices pretty much set in stone.”