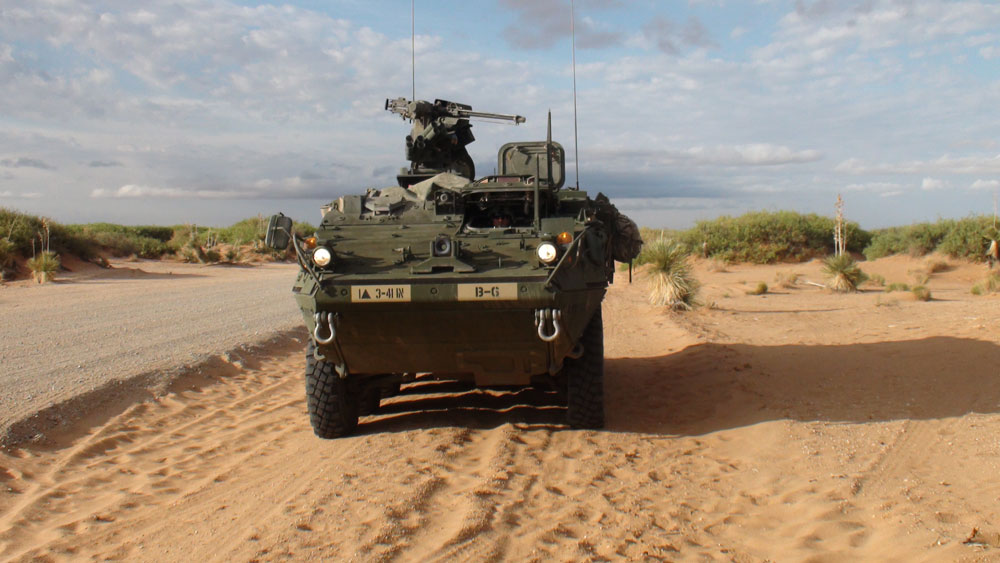 EL PASO – It was Marlon Brando in Apocalypse Now who said “I love the smell of napalm in the morning.” For me it is the sound of powerful diesel engines idling, hinting just a promise of the power at your command and diesel fumes filing the air that takes me back to an earlier time when it was my company waiting to move out to the field. I had been a career Infantry Officer until my injury. I took the uniform off long ago, but the feel and the thrill of moving a company of men and vehicles to engage an enemy is a feeling that is never forgotten. So when this assignment came along, I did not have to think long before agreeing to work as an embedded reporter in a military exercise at Fort Bliss, Texas. A M113 the armored personnel carrier used when I was a Captain. (©Vytauto)

The M113 was a fully tracked armored personnel carrier that has formed the backbone of the United States Army’s mechanized infantry units from the time of its first fielding in Vietnam in April 1962. The M113 was the most widely used armored vehicle of the U.S. Army in the Vietnam War. The ride was rough, the interior was dark, cramped the seats had little, if any padding, and with the hatches closed it was hotter than Hades inside, so I was curious to see how the Stryker stacked up. Let me tell you it was no contest.

The IAV Stryker is an eight-wheeled, 4-wheel-drive (8×4), armored fighting vehicle derived from the Canadian LAV III. The ride is as smooth as any car I have ever been inside of and the air conditioning was better than my car. The seats were luxurious compared to the old M113. However, where the Stryker beat the old M113 hands down was in the armament.

With the M113, the primary armament was one .50 caliber machine gun mounted on top in front of the vehicle commander’s cupola. A lot of fire power to be sure, but to use the gun required the gunner to be exposed to enemy fire. The Stryker’s weapons system was like something out of Star Wars. With the exception of some specialized variants, the primary armament of the Stryker is a Protector M151 Remote Weapon Station with .50-cal M2 machine gun, 7.62 mm M240 machine gun, or Mk-19 automatic grenade launcher as needed. The gunner sits at a computer console and aims and fires the weapon system remotely. A photo of the Afghan village recreated for the military training exercise. (Ken Hudnall/Borderzine.com)

Another impressive aspect to the mission was the type of training that was being conducted. It was as realistic as humanly possible. I had trained in mocked up Vietnamese Villages 30 years ago, but the Afghan village we arrived at could have been in Afghanistan. Even some of those who were acting as villagers were Afghani, the language spoken was an Afghani dialect. The troops were forced to use interpreters just as they would in country. If you did not know you were in Texas, you could easily be convinced you were in Afghanistan.

I have to say that the operation was impressive, at least to this reporter. I kept up a running mental commentary comparing this training to what I had received and given so many years ago. The Army has come a long way. However, one important factor has not changed and will never change as long as there is an army in combat.

When all is said and done, no matter how sophisticated the weapons systems, how sensitive the satellite imagery or how advanced the ride, it all comes down to that 11B Infantry soldier who has to leave the safety of his vehicle and meet the enemy Mano a Mano (sorry ladies). It is the soldier that is the backbone of our military, not weapons systems or vehicles, no matter how impressive.

Lastly, I want to recognize a true gentleman, Lieutenant Colonel Anderson, the Battalion Commander of 341. He made all of us there for this training feel welcome and made sure that we wanted for nothing. He was a commander who was sure enough of himself to be himself and not a tin soldier. To him I offer a salute, something I have not done in thirty years.

3 thoughts on “Back in the saddle again – Old soldiers never die, they come back as journalists”