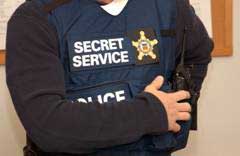 As of April 19, three Secret Service employees involved in the scandal were forced out of the agency. (©United States Secret Service)

EL PASO – Prostitution is routinely accepted as part of the culture in the third world countries of the southern hemisphere and success in that field can be a source of pride.

In the United States, however, prostitution is still shunned and often associated with scandal, which is why a successful high priced Colombian prostitute has landed on the front pages of major American newspapers. As of April 19, three Secret Service employees involved in the scandal were forced out of the agency. (©United States Secret Service)

In this bizarre situation, the local customs of Colombia, vis-à-vis, sex and prostitution have become intertwined with the customs and practices of the United States Secret Service.

So now the extra curricular sexual practices of various senior Secret Service agents are the subject of hearings in the U.S. Congress. The twists and turns of this tale make an interesting story.

When the President of the United States travels overseas, an advance team comprised of Secret Service agents and members of the U.S. military are sent ahead of the President to make sure that it is safe for him to travel to that part of the world. That is the official function of these teams. The advance team agents carry with them the glamour and mystique of the Secret Service that has become a part of our society based on history and depicted in movies and books. As a result of this mystique these agents are viewed as larger than life and somehow better than the rest of us, so when they stumble, so to speak, it is a major shock to the American sense of values.

These agents are men like the rest of us, with the same weaknesses and flaws as the rest of us. However, their judgment is expected to be beyond reproach, since their judgment can affect the safety of the most powerful man in the world, the President of the United States. To become involved with a prostitute and then let the situation play out in world headlines shows not only a lack of judgment, but also a complete disregard of their status as representatives of the President of the United States.

In final analysis, what happened was not a crime in Colombia and is something that most, if not all, of the congressmen who want to sit in judgment have been guilty of at one time or another. However, these agents brought disgrace not only on the service but also the country they serve.

It is a sad thing for any culture when its heroes turn out to be just ordinary human beings and that is at the crux of the uproar over the trials and tribulations of a Colombian hooker.