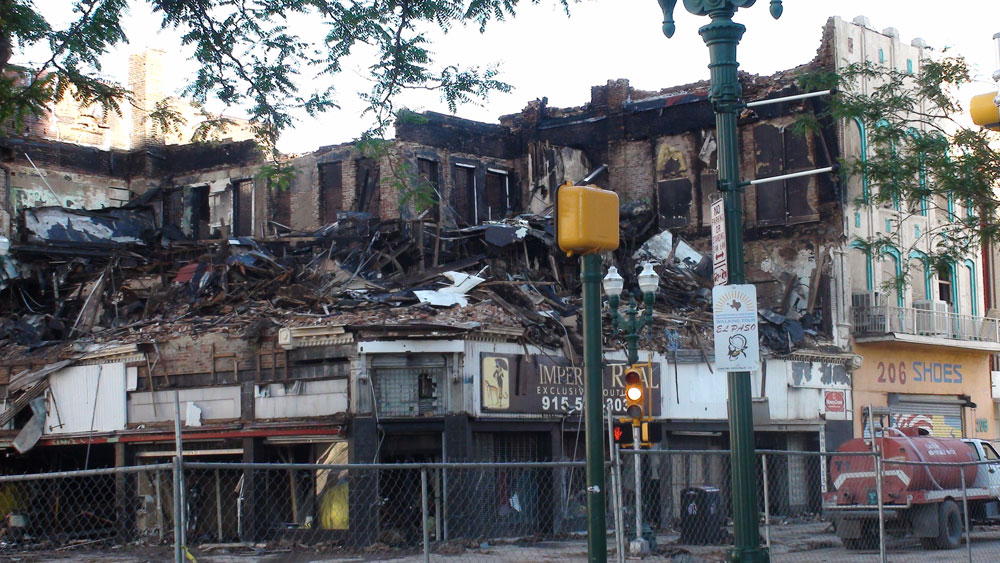 EL PASO – As these words were written the once white gleaming walls of the building where legendary western fast gun and attorney John Wesley Hardin had his apartment and office were collapsing. The second and third floors of one of the most historic buildings in El Paso are a burned-out ruin. In minutes, a large chunk of El Paso history became ashes The well-known building, located at the intersection of San Antonio Ave. and S. El Paso St. and directly across the street from the Camino Real Hotel, went up in flames shortly after 6:30 p.m. Thursday, April 19. Eventually, more than 100 firefighters were called to the scene where heavy smoke and flames could be seen shooting out of the first floor windows. From the apparent ignition point on the first floor, the fire soon spread to the second and third floors. The fire raged for hours, eventually destroying the historic old building to the point that the structural integrity is in doubt. The top two floors were knocked down by firefighters to both help control the blaze and keep the building from collapsing.

An official cause for the fire has not been determined, but fire investigators are working to try and figure out how and why the fire broke out and spread so rapidly. Both San Antonio Ave. and South El Paso Street were both blocked by barricades as of Saturday. There is still a police presence there to ensure that no one goes in or near the remains of the building.

Another historic piece of El Paso is a thing of the past. It is sad that a town known as the gateway to the old west is allowed to literally crumble while city leaders argue over who among El Paso’s first families gets the next tax abatement to built a new hotel or open a new business. El Paso rivals or even surpasses San Antonio in regard to history, but we can’t benefit from that natural resource at the rate we are losing it.