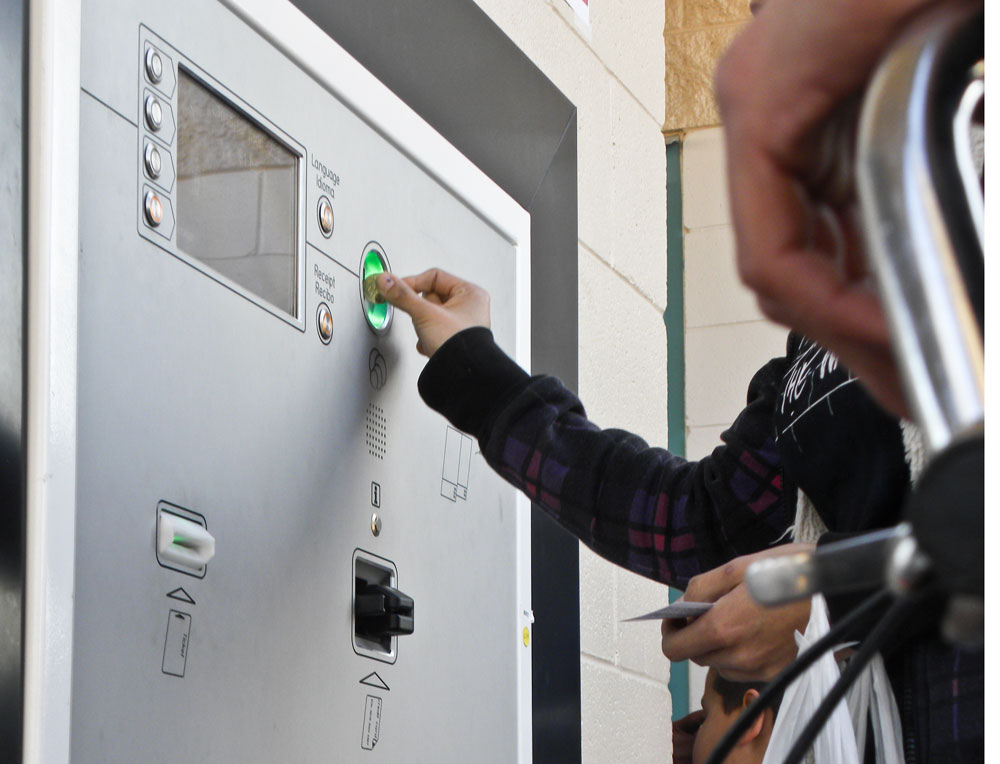 EL PASO— An elderly woman hesitates as she stares blankly in expressionless confusion at a new robot in an old familiar place now turned into an alien world. She sets her bulky bags on the pavement and slouches in the middle of the pedestrian traffic at the Santa Fe Bridge border crossing point.

“Yo no sé qué hacer, no mas pregunto a que me ayuden,” said Elizabeth Quiñones while carefully separating the pesos from the pennies, nickels and dimes in her wrinkled left palm. “I don’t know what to do. I only need help,” she said.

At the same time many people slow their walking pace and stare straight ahead impatiently. It is 4 p.m. on a Monday and everyone is eager to cross the bridge to head home but the growing queue leads only to a frustrating halt.

Like most crossers Quiñones speaks only Spanish and asks for help because she does not know what to do with the new machines, which were installed in January. Elderly pedestrians in particular are stupefied at the sight of this new technology. The new system is causing stalled lines because of a learning curve in pedestrians and some problems with the new machines. (Guerrero Garcia/Borderzine.com)

The new system is part of an El Paso City Council capital improvement plan, which includes a series of projects that will be installed around the city in the next couple of years. Currently the city department of International Bridges is overseeing the rehabilitation and construction of the downtown bridges at the Stanton and Paso Del Norte ports of entry.

“It has been in the planning for probably about 10 years now, but it’s been under constructions for like the past two years.” said Eddie Romero the Toll Collection Supervisor.

The most profound innovation at these international bridges is the installation of the toll machines. Pedestrians purchase a ticket in these machines and then swipe that ticket as they make their way pass the turn stalls.

This innovation has caused confusion and desperation among those who cross the bridge.

“Before there were no lines because it was much quicker to pay, now the lines get long,” said Jesus Gonzales a junior psychology major at UTEP who crosses the bridge every day.

Before the upgrade people crossing the bridge would give the change to a teller, who kept the line flowing. The machines have now forced people to slow down to buy the ticket.

The project also includes the construction of a new building on the Stanton Bridge that will house the administrative offices. The Paso Del Norte Bridge now has a new building, which is also used to collect tolls when the new machines are not working. New canopies and rest areas are included in the new system that is part of an El Paso City Council capital improvement plan. (Guerrero Garcia/Borderzine.com)

Canopies have been installed on the west side of the Stanton Bridge where people usually cross on foot. At the Paso Del Norte these canopies cover both cross walks, stretching as far as Sixth Street.

“They will provide shade and comfort to the people passing through,” said Romero. “More lighting and added security will provide some protection to people crossing the bridge.”

In addition to this, both plazas were renovated with water fountains, seating areas and new automatic bathrooms. These bathrooms are designed service themselves. The toilet cleans itself after every use, and after every 10 uses the bathroom closes and sprays itself clean.

Another investment to the plazas is the art work that represents the cities culture. In the Paso Del Norte Bridge there is a 50-ft. sculpture El Aguasero by the renowned artist Sebastian. The Stanton Bridge has artwork in the works on a 100-ft. wall by a local muralist known as Werc.

“Va ser un retrato contemporáneo que presenta la historia, la cultura y tradiciones de aquí en la frontera,” said Werc, as he painted calmly a sombrero. The mural will be a contemporary representation of the history, the culture and the tradition of the border.

Werc said this opportunity is special to him because he grew up here in El Paso and he said he hopes that his art will motivate local youths to paint.

Jessica Gonzalez, a student at El Paso Community College said that she is pleased with the improvements but said she has noticed the confusion among elderly people at the new toll machines.

“They do not know what line to make and what line will take their correct change,” she said.

There are four lines to choose from, one is for Mexican change, pesos, another for American change, and then one for dollar bills, the fourth line is a teller who can provide change. Gonzalez said the first time she crossed it was hectic. “It was a weekend and there was a huge line. After standing for a long time the officer told us to make another line because the machine was not working.”

During the first couple of weeks of operation, the toll machines encountered some mechanical problems. Patrons found an out-of-order sign covering a screen, usually the one that accepts pesos. These machines have been successful across the nation, according to Romero, and this is the first time they will be used along the U.S.-Mexico border.

“We did have some problems with the machines, however the company that manufactured them has sent us modified parts,” said Romero. “The thing is although there are machines like these across the country, this is the first that accepts Mexican coins.”  There was difficulty with the alignment and the weight of the pesos was not recognized by the machine, Romero said.

“Since the installation of these modified parts the machines seem to be working better now than they were in the beginning,” he said.

The Paso Del Norte Bridge opened the new tolls facility in January 13th of this year and already it has seen more than 150,000 people pass. The Stanton Bridge is under construction and is expected to be completed in a couple of months.

“There is a learning curve as with everything,” said Romero. “For 100 years people have passed and thrown the money to the person behind the window. Now they have to buy a ticket to pass; people need to learn how to do new things.”

Artist Werc paints his version of contemporary history and culture of the region. (Guerrero Garcia /Borderzine.com)

After paying at the new tolls, pedestrians get a card that allows them to go through the turning stalls. (Guerrero Garcia/Borderzine.com)

New restrooms that clean automatically are part of the renovations. (Guerrero Garcia/Borderzine.com)

The new system is causing stalled lines because of a learning curve in pedestrians and some problems with the new machines. (Guerrero Garcia/Borderzine.com)

New canopies and rest areas are included in the new system that is part of an El Paso City Council capital improvement plan. (Guerrero Garcia/Borderzine.com)