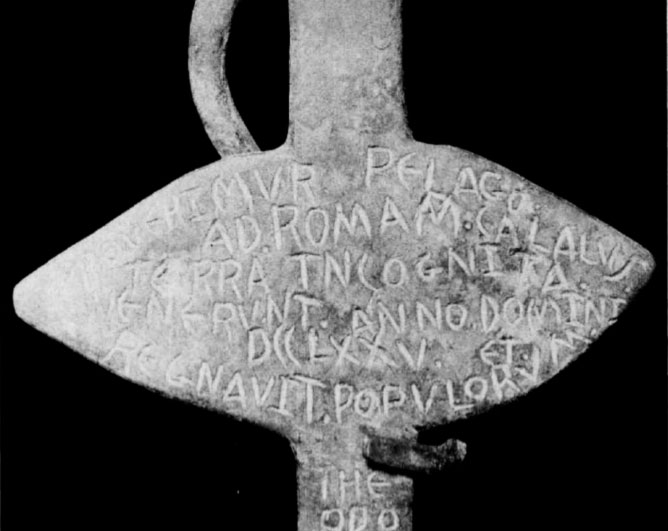 Engraved on the cross found in the Arizona desert c.1922 is the tale that after landing on the coast of the Gulf of Mexico, the Romans marched northwest until they arrived at a desert area near present day Tucson. (Photo from the Desert Magazine, December 1980.)

Engraved on the cross found in the Arizona desert c.1922 is the tale that after landing on the coast of the Gulf of Mexico, the Romans marched northwest until they arrived at a desert area near present day Tucson. (Photo from the Desert Magazine, December 1980.)

EL PASO – In our modern world we tend to think of stories of pygmies and giants, dragons and the wee people, hidden treasures and mysterious lost cities as fairy tales and bedtime stories, but these yarns have roots deep in the distant history of the American Southwest.

Almost 500 years before the arrival of Christopher Columbus, Leif Ericson explored the land west of Greenland and established a small settlement. More than 300 years before Columbus landed in Santo Domingo in 1492, a Welsh explorer navigated up Alabama’s Mobile Bay and established European styled fortifications and settlements as far north as the Ohio Valley.

But perhaps even they weren’t the first to come to the new world. Roman Christians may have established a colony on the outskirts of what is now Tucson, Arizona as far back as 775 A.D. Unfortunately, mainstream archeology and academia have dismissed these discoveries as either hoaxes or simply as unworthy of discussion. However, to their chagrin, such unusual discoveries continue to be made.

When the European explorers landed on the eastern shores of this great land, they believed that it was untouched by man. Then the explorers met the scattered Indian tribes that inhabited the east. Most of the tribes in North America were small and ill prepared for the arrival of one of the greatest scourges of the old world – the religious zealot. The Conquistadors were bringing the word of God to the heathen of the New World whether they wanted it or not.

The arrival of the Spanish was not an accident; there was a legal basis for their move to the new world. In 1095, at the beginning of the Crusades, Pope Urban II issued an edict, referred to as a Papal Bull.

The first of these Papal edicts affecting the new world was called Terra Nullius (meaning empty land). This Bull gave the kings and princes of Europe the right to “discover” or claim land in non-Christian areas. This policy was further extended in the year 1452 when Pope Nicholas V issued a Papal Bull entitled Romanus Pontifex, declaring war against all non-Christians throughout the world and authorizing the conquest of their nations and territories.

These religious edicts treated non-Christians as uncivilized sub-humans, and therefore without rights to any land or nation. Christian leaders claimed a God-given right to take control of all lands and used these Papal Edicts to justify war, colonization, and even slavery of the people living in the conquered lands.

As detailed by Rick Osmon in Graves of the Golden Bear: Ancient Fortresses and Monuments of the Ohio Valley, by the time Christopher Columbus set sail in 1492, this idea, which was referred to as the Doctrine of Discovery, was a well-established concept.

The Spanish, acting on the assumption that there were no previous civilizations existing on the North American continent, rushed in to claim the “empty lands” granted them by the Papal Bulls. In spite of contemporary tales of others finding the new world, the Catholic Church through its major sponsors at the time, the Spanish court and the Jesuit brotherhood, were able to ensure that history would show that Christopher Columbus was the first to find the new world. Spain was his sponsor, and thus Spain was due a legal and rightful claim to the entire New World, including all riches and human slaves that could be found there.

However, during the initial exploration, to their chagrin, there were signs that there had been a pre-existing civilization. There was even evidence that there had been a pre-existing “Christian” civilization in North America. This fact, alone, if proven, would have thrown the ownership of this great land up for grabs as the Papal Bulls would not have applied to the new world.

Under the instructions of their religious “advisors,” the Spanish moved to eradicate the evidence of earlier settlements, thus making the new world safe for conquest.

There is evidence that in 775 A.D. a fleet of ships carrying 700 Christianized Romans left the Roman Empire under the command of Theodorus the Renowned bound for the New World. The information regarding this colonial effort comes from an engraved cross that was unearthed near present day Tucson, Arizona.

According to the story engraved on the cross, after a landing on the coast of the Gulf of Mexico, the Romans marched northwest until, arriving at a desert area near present day Tucson, where they built a city that they called Terra Calalus. According to the records found, the colony flourished until approximately 900 A.D when the local Native American tribes that they had been oppressing for almost 125 years destroyed it.

The Romans were not the only Europeans to predate the arrival of Columbus. The Daughters of the American Revolution placed a most interesting plaque at Fort Morgan, Alabama few years ago commemorating the explorations of Prince Madoc, a brave Welsh explorer. A few historians have insisted that Prince Madoc and his followers landed on the shores of Mobile Bay in the year 1170, over 300 years before Columbus came to America.

At the unveiling of the plaque were Mrs. Mary Yale Williams, both a descendant of the Madoc family and a member of the family that founded Yale University, Hatchett Chandler, of Fort Morgan, at whose suggestion the marker was placed at the old fort and Miss Zella Armstrong of Chattanooga, author of Who Discovered America: The Amazing Story of Madoc, a book in which she concluded that Madoc was the first white discoverer of what is now the United States.

Many researchers have investigated the claim of Madoc and the 1170 date and a few have found substance in the claims. Much of the early research along this line centered on stories regarding “Welsh speaking Indians” that were purportedly of fair complexion and that used round boats built much more like Welsh coracles than like canoes. Indeed, several portraits and chronicle entries by early journalists, particularly by Meriwether Lewis and George Caitlin, appear to depict light skinned, blue-eyed people in native attire living among the Mandan tribe of the Missouri River country.

According to the story, hostile Indians killed Prince Madoc during an attack. Supporting this sad ending to the career of this brave individual was a discovery in Wales of an ancient chapel. During a renovation of this structure, a mural was found commemorating the death of Prince Madoc and in the mural the attackers were identified as feather wearing individuals who shot arrows at the Welsh explorers.

According to the research of Philip Coppens in his work Copper: A world trade in 3000 BC? Predating even the arrival of the Welsh and the Romans, the era around 3000 BC saw more than 500,000 tons of copper mined from the so-called Upper Peninsula of Michigan. The largest mine was on Isle Royale, an island in Lake Superior, near the Canadian border. Here, there are thousands of prehistoric copper pits, dug thousands of years ago by an unknown ancient people.

The mining operation on Isle Royale was neither small nor primitive even by today’s standards. The Mining Belt on Isle Royale is one and three quarter miles in length and nearly four hundred feet wide. The copper pits range from 10 to 30 feet deep with a maze of connecting tunnels that one archaeologist estimated would have taken the equivalent of 10,000 men working for 1000 years to dig.

After two centuries of speculation, no one has ever satisfactorily explained either the identity of the miners or where all of this copper mined by these unknown miners went. Dating of the relics found at the site revealed that extraction of copper from Isle Royal began in 5300 BC, with some researchers even claiming that it began as early as 6000 BC. Evidence for smelting is known to exist from “only” 4000 BC onwards.

The exact amount of the mined ore is perhaps never going to be exactly determined, but what is known is that about 1200 BC, all mining activity was halted. But around 1000 AD, mining was restarted and lasted until 1320 AD. During this period more than 2000 tons of copper ore were removed.

So clearly, there were a fairly large number of inhabitants of some sophistication living in North America over 5,000 years ago and there were a number of explorers and settlers here long before Christopher Columbus “discovered” America for the Spanish Crown.

In future articles, we will examine not only these stories but other fascinating aspects that are numbered among the many mysteries that make the Southwest United States such a fascinating part of the country.

Editor’s Note – This is the first in a series of articles that examines data showing that North America has been a crossroads for explorers from distant lands for more than a thousand years and that Europeans may have actually established colonies in America long before Columbus sailed the Caribbean Sea.

15 thoughts on “Did Europeans settle in the Arizona desert thousands of years before Columbus sailed to America?”