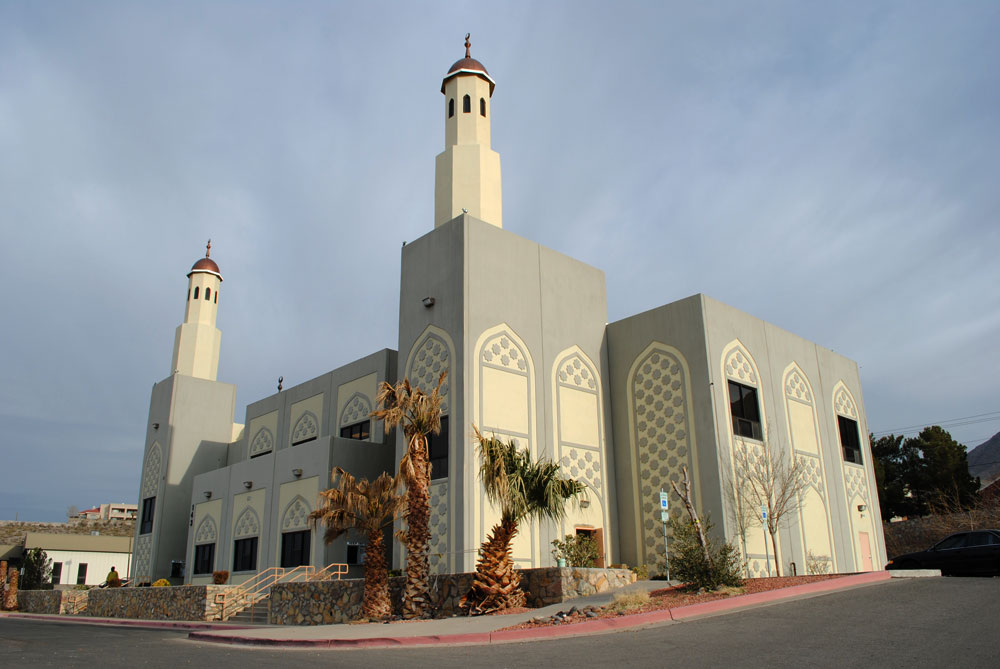 Bashar Abu and his family attend The Islamic Center of El Paso to pray for his siblings in Syria. (Anoushka Valodya/Borderzine.com) Bashar Abu and his family attend The Islamic Center of El Paso to pray for his siblings in Syria. (Anoushka Valodya/Borderzine.com)

EL PASO – Bashar Abu doesn’t know if his six siblings are still alive in the Syrian city of Homs, which has been ravaged for about a week by rocket bombings, tank shells, sniper bullets and grenades.

Abu, 50, the former engineering design manager for the City of El Paso, said that he feels helpless because it has been days since he heard from them. His somber face and sharp eyes reveal that he has a lot of worry on his mind.

“My wife is walking around with red eyes from constantly crying since her mother is in Homs. I check the online news like every five minutes, looking for any updates. We just want to know what’s going on,” he said.

Communication lines have been cut off from there since Wednesday. CNN reported that more than 100 people died Thursday in Homs, the third largest city in Syria, home to 1 million residents and to one of the country’s two oil refineries. Its central location in Syria makes it a hub for business and easy access to Syria’s biggest city Aleppo, which is also constantly attacked with bombs.

According to CNN, Homs has suffered more than 6,000 casualties since the anti-government uprising began last March between pro-democracy civilians and President Bashar al-Assad’s regime.

Abu said that he prays for his two brothers and four sisters, who are in their late 20s and 30s, all married with children, ages 4 to 14.

“I wish them to be safe. We trust that their lives are in the hands of God,” he said. “If something happens to them, then we know that God wanted them. If nothing happens, then God saved them. We wish to see them soon and as soon as things calm down, we’ll go [to Syria] to see them.”

Abu goes to the Islamic Center in West El Paso every evening to pray. “I can’t do too much. I help whatever I can by sending money to my brothers and sisters,” Abu said. His siblings have been hiding out in their homes for the past 11 months.

“They risk their lives each time they leave their homes to buy food. Or they eat very little, or they fast,” Abu said.

One of his sisters is a computer science graduate from North Carolina and his brothers work in the field of science. Abu said they stopped going to work nearly a year ago because it became too dangerous.

“There are snipers at the top of buildings, shooting at random at people in the head. Abu found out that friends and former neighbors have died in this conflict. Regarding his family, he said he became especially distressed over the fate of his 14-year-old nephew.

“He was taken by kidnappers a few months ago and was beaten up in jail … a bruised face,” he said. Besides dodging bullets, Syrians have to watch out for another kind of danger.

“Kidnappers are just out there, watching people in the streets and they say to each other, ‘Let’s take this one.’ They just want to make money.”

The teen’s parents had to bribe prison officials with an undisclosed amount of money to release him, otherwise, Abu said, the boy would have been killed. After the ransom was paid, his nephew fled to a village.

“It’s a game of you don’t know what’s in your hand until the other guy opens his hand,” Abu said. “And we don’t know what they’re trying to accomplish by killing their own people – people who don’t even have weapons.”

When talking to his siblings on the phone, Abu said they use a lot of metaphors as a way to protect themselves from potential harm.

“When they tell me it’s raining over there, that means there have been a lot of shootings,” Abu said. “They say that bad people arrived in the neighborhood, which means that people from the government were there. They are so scared that someone is spying in our phone conversations, and so Syrians are being raised with fear in their own country.”

Abu said Americans are lucky to have a national unemployment rate of less than 10 percent.

“Unemployment in Syria is at 60 percent right now, so people don’t have money to eat,” Abu said. “Living there has become a frustration, and Syrians have come to a point where they don’t care anymore. They want their freedom or death.”

Abu said that after he retired, he had planned to move back to Syria before the conflict began.

“I want my kids to grow up in the same culture that I grew up in, and to especially have them enjoy their childhood. Here in the U.S., children grow up too fast.”

Last year, Abu sold his house in west El Paso and took his wife, three children and mother back to Syria. He has five children, ages 6 to 23. The oldest two stayed in the U.S. When the war started last March, he decided to bring his family back to El Paso where it’s safe, yet the worries travelled back with him and they still hover over Abu’s household.