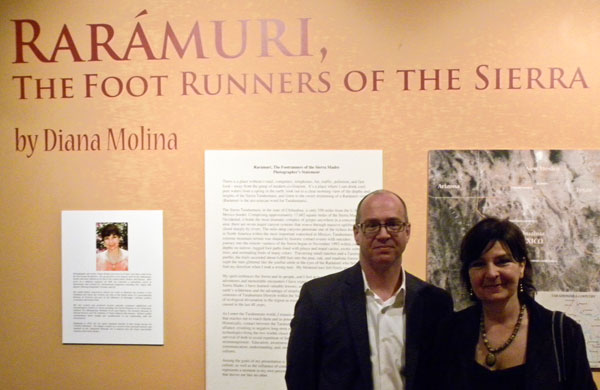 Photographer Diana Molina and Centennial Museum Director Bill Wood, want to provide an introduction to what Rarámuris are. (Guerrero García/Borderzine.com)

EL PASO — Isolated in the high reaches of the Sierra Madre in the state of Chihuahua, Mexico, the semi-nomadic Tarahumara tribes have lived off the land for thousands of years, preserving their identity and vibrant culture.

Calling themselves the Rarámuri, derived from their word for foot-runner, they are renowned for running marathons barefooted or in huarache sandals across the long slopes and vast canyons of the Sierra Madre.

Their very existence is now threatened by a terrible dry season that has brought crop-killing drought, starvation and desperation to these remote communities.

“Sending food, sending aid is helpful, but it’s only a Band-Aid,” photographer and writer, Diana Molina said passionately. “It does not address the larger issues.”

Molina is the photographer behind the exhibition titled Rarámuri, The Foot Runners of the Sierra Madre, currently at the Centennial Museum in the University of Texas at El Paso.

With her lens Molina captured the unique lifestyle of the Rarámuri and the exposures revealed the issues that are threatening their culture.

“The implications of the drought that the Rarámuri are experiencing are aggravated by deforestation,” Molina said. “The clear cutting of timber in the Sierra Madre is causing change in rain patterns.” Photographer Diana Molina and Centennial Museum Director Bill Wood, want to provide an introduction to what Rarámuris are. (Guerrero García/Borderzine.com)

The Sierra Madre is home to one of the largest biologically diverse areas in Mexico and about two thirds of the country’s standing timber. The forests are quickly falling prey to clear-cutting loggers. Some of the cutting is controlled by the Mexican government, but thousands of acres are harvested illegally by poachers harming the natural ecology and the Rarámuri way of life that depends on it.

Molina said the larger issues that need to be addressed are those that directly affect the Raramuri, such as deforestation, mineral extraction and drug violence.

Molina remembers sitting with a Raramuri on a hillside as he described how much things had changed. The man recalled that as a child the mountain was covered with trees and now, as they both stared at it, it was bare. Not a tree in sight.

“It’s tragic,” Molina said, “I’ve seen an entire mountain sierra dug up and disappear, disappear from existence because of the mining.”

She affirms that the changes in the Sierra Madre are heartbreaking. The Rarámuri have occupied the sierras for over 15,000 years, living from it, depending on it, but in the last 50 years there has been more damage than ever before. “It’s a profound change,” she said.

“I hear people say pobres Tarahumaras,” Molina sighed, “On the one hand, yes poor Tarahumaras, but it’s because of what we are bringing to that damage to that challenge of their life in the sierra.”

Drug cultivation also threatens the Rarámuri culture and their lifestyles. These tribes fall victim to drug violence, narcos who force the Raramuris to grow the drugs for them.

The marijuana and opium plantations started in the 1970s and the counterculture revolution of the 1960s created a market for mind-altering plants. In Molina’s opinion these plantations in the Sierra Madre are directly supported by drug consumption in the United States.

“It’s one of the most secluded areas in the world and certainly relatively close to the border,” Molina said. The ongoing battles between the drug cartels is impacting them, she said. The Rarámuri take part in the cultivation willingly and unwillingly.

Molina said she knows for a fact that if a grower doesn’t take the price the cartels offer, he is simply killed. The cartels pay little to nothing to the Rarámuri, usually with corn or in cocaine.

“The lives of the Rarámuri are wrapped up with the problems we are all facing as a community,” Centennial Museum Director Bill Wood said, “With the climate change, the drug violence and the war between the cartels.”

Wood and Molina believe this and future exhibits provide an opportunity for audiences to heighten their awareness of the problem and to reflect on the connections between societies here and in the Chihuahua Desert.

“That’s what this exhibit does; it celebrates the Rarámuri culture and their traditions,” Wood said.  “It deepens our understanding of their way of life as a way of getting us to think about our own lives and the way we live and whether or not we can learn something from them.”

Wood believes that Molina’s exhibit can engage people in conversations about issues affecting the southwest and its inhabitants. He said it serves as an introduction to the Museum’s new mission, which is to inform about and celebrate the Chihuahuan Desert.

“This provides an introduction and knowledge of who they are,” Molina said. “Now it’s about learning from them and working together to solve these problems.”