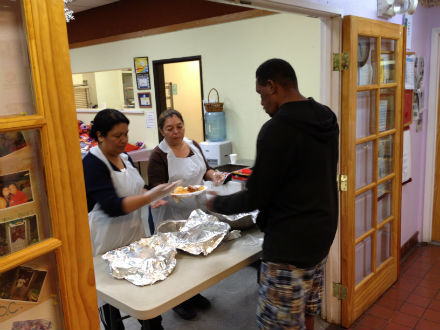 Rosario Aguilar, 46, left, and Martha Gonzales, 50, serve hot meals to anybody who needs them Monday through Thursday at the Salvation Army in El Centro. –Photo by Paul Bugarin

EL CENTRO, Calif. – Sitting among the hundred or so people in the large hall at Christ Community Church’s Kitchen with a Mission, Wade Hensley, 45, and Eva Morales, 32, wait at a round table littered with half-full plastic cups of red-colored punch, with their 6-month-old daughter cradled in Eva’s arms and their three other kids playing in a room next door. Rosario Aguilar, 46, left, and Martha Gonzales, 50, serve hot meals to anybody who needs them Monday through Thursday at the Salvation Army in El Centro. –Photo by Paul Bugarin

This is a typical Friday evening for Hensley and Morales, a common-law couple of seven years, who were once homeless for six months, then lived in an RV for almost two years before renting an apartment just down the street from the church that they frequent every week because feeding a family of six on food stamps isn’t enough.

“We run out of food sometimes,” said Hensley who is disabled with a herniated disc in his back. “We just have to budget for it.”

Friday meals, weekly hot lunches and holiday dinners are among the services utilized by 21,000 Imperial Valley residents who are hungry.  However, the Imperial Valley Food Bank estimates that local food insecurity affects about 50,000 people, roughly 31 percent of the county’s population; and the numbers have nearly tripled since 2008.

This level of hunger is the worst in the state, where food insecurity averages 16.7 percent and ranks as the eighth worst in the country.

Perhaps more shocking are estimates that nearly half of Imperial County children are going hungry, a statistic that Sara Griffen, director of the Imperial Valley Food Bank, calls “embarrassing.”

Ironically, the Imperial Valley is one of the richest food production regions in the world with a $1.6 billion agriculture industry employing about 48 percent of the county’s people.

Hensley’s daughter is enrolled in her school’s food program, obtaining meals provided by the district at no cost to her parents, which eases the burden on her family to provide more meals than they can.

Griffen said the “Backpack Program,” provides children, who for whatever reason are not adequately fed at home, with Approximately 100 people wait patiently for their free meals at the Kitchen with a Mission event held at Christ Community Church in El Centro, Calif., every Friday evening, beginning at 6. – Photo by Paul Bugarin

food they can prepare themselves and that will last the weekend.

“The schools help identify the ‘at-risk’ students; students who are only eating when the school provides a meal,” said Griffen.  “A lot of schools have free lunches.  The Backpack Program sends kids home on Fridays with ready-to-eat or easy-to-prepare food.”

Griffen said that senior citizens are as vulnerable to hunger as children are, being on fixed incomes and often choosing to pay for life-sustaining medical care or utilities instead of food.  More than 60 percent of Americans older than 65 are food-insecure, according to the “Hunger in America Study 2010,” conducted by Feeding America.

The food bank is struggling to keep up, according to Griffen, who says that they are experiencing a shortage of food and are in need of donations of both food and money.

“Come by the food bank between 7 and 3 and donate food.  Money can also be donated online, and any donation is tax deductible,” said Griffen, “any donation stays within the valley to feed the people in the area.”

Other agencies work in conjunction with the food bank to reach the estimated 50,000 hunger-impacted residents of the Imperial Valley.

Terry Caswell, a volunteer at Christ Community Church, runs the Kitchen with a Mission, which serves about 100 people once a week.  Caswell oversees the kitchen at the ministry and strives to run the operation as professionally as possible.

“My goal is to have the kitchen certified to a restaurant quality,” said Caswell, “so there is no question about the operation.”

The Salvation Army is another organization whose goal it is to reach as many people in need as possible.  The organization provides hot lunches every week, Monday through Thursday, to anyone who needs them, serving about 4,000 people per month on average.

Capt. Jerry Esqueda, a corps officer for the Salvation Army of Imperial County, reinforces the fact that anybody who feels hungry or is in need is more than welcome to take advantage of the services provided.

“We don’t turn anybody away,” said Esqueda, “we don’t just help homeless people.  If you’re hungry or need help, we can help you.”

Victoria Corane, a volunteer at the Salvation Army said the charity’s Adopt-a-Family program gives people who want to help the chance to give food, a hot meal, and toys to children of the adopted family.  If you are interested in the program, you can call the Salvation Army at (760) 353-2260.

The Salvation Army, Christ Community Church, and the Imperial Valley Food Bank accept donations year round and are always in need of food, clothing, and monetary donations.

I am a nursing major at Imperial Valley College who decided to take a Journalism 100 class for some extra units. I am 30-years-old and have lived in Calexico, Calif. for most of my life. I spent 8 years living in San Diego and working at Papa John's Pizza as a General Manager before deciding that i wanted to return to school. I quit my job and moved back home and haven't looked back since.