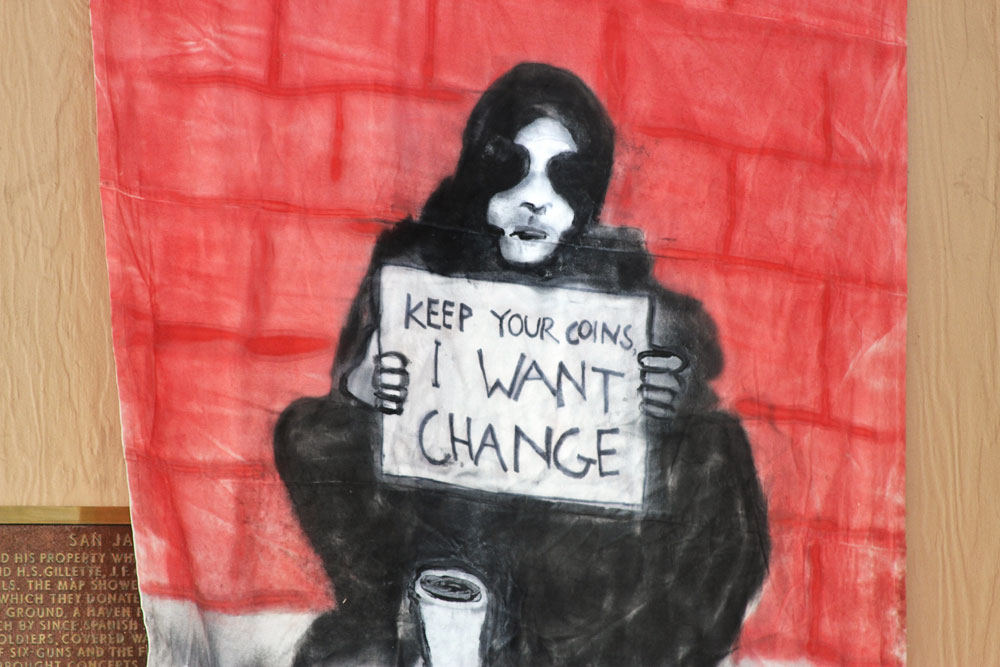 EL PASO – Occupy El Paso demonstrators set up tents in the usually vacant San Jacinto Plaza in downtown as part of a national protest against perceived economic inequality and corporate control of government.

Students, college graduates, homeless persons, professors, the unemployed and employed are few examples of individuals displaying their frustration about unemployment, the nation’s economic despair and the federal government’s bailout of banks. Fabiola Martinez, a young, courageous, and jovial woman was one of the many individuals expressing her feelings on how the government has treated its people. “The government is not paying attention to what the people want and need. They are oblivious to what we need; our school systems and health care are failing,” said Martinez. Her remorseful and frantic facial expression were told  more of her feelings when I asked her why she was involved in  Occupy El Paso.

Martinez explained how her oldest daughter got sick and the doctor told her it was a virus on her face and as the blisters started to pop the rash would begin to spread. She did not have health insurance because she was categorized as being a middle class family. Martinez took her daughter’s prescription to Wal-mart and found out that the medicine cost $500. Tears began to flow because she could not afford the cream. Frustration had reached a tipping point. Martinez said she was working at Dial America where she was not making much money. She was paying for child care, gas, and food. This would only leave her $20 in her pocket.

She realized it did not make sense to leave her children and pay so much for child-care, which is why she stopped working. “Why doesn’t the government look at these issues? Many people face these issues, why is this not a priority for these politicians? Aren’t they there to represent the people. I feel like my voice hasn’t been heard. That’s why I have voted for the past 10 years. I have voted Republican, Democrat and Independent. Now I don’t want to vote for anyone. I want it to be equal. I want real change,” she said.

One of their many concerns that Occupy El Paso participants raised was that they wanted citizens to have the opportunity to work and make a decent living for their families.

They emphasized that they do not want any handouts. They felt that the government needs to ask the people what they need and want. Some participants want the government to pass bills to create jobs, and help the people in foreclosures. Foreclosures have affected thousands of people everywhere, leaving them homeless.

I asked a few of the occupy El Paso participants if they felt like major corporations like GM or Ford that are outsourcing, owe something to the U.S. economy. We are the 99%. (Luis Hernández/Borderzine.com)

They said that corporations need to contribute more to this country. One individual (who chose not to disclose his name) said, “You have to do for your own country. This is the future my kids will inherit, but first my country. This is where I was born. Ford and all those giant companies in Michigan have it all wrong from the beginning because instead of creating and building stuff that’s good for the future they built Hummers, which is not right. It’s creating these others issues that go back to the government because they could put regulations to do things to help the environment.”

I believe Americans do not have the money to buy lobbyists to go lobby for them but these big corporations do and that is unjust, because they are not representing the people.

Corporations are donating their money for politicians and that can be depicted as a conflict of interest. Those politicians are there to represent the people but if there receiving money from the corporations, then they are not there representing the needs of the American people.

I agree with what these courageous individuals are doing to voice their opinions on what is unjust.

Occupy El Paso participants want to see change in their governments. They want the America that the founding fathers had envisioned of having equality, inalienable rights and the pursuit of happiness to come into play.

Financial greed and corruption was not on the agenda of our founding fathers, which is why participants want their voices and concerns heard and laws enacted quickly.

A 22 year old political science major at the University of Texas at El Paso.Married to a former military man and has a 2 year old son.