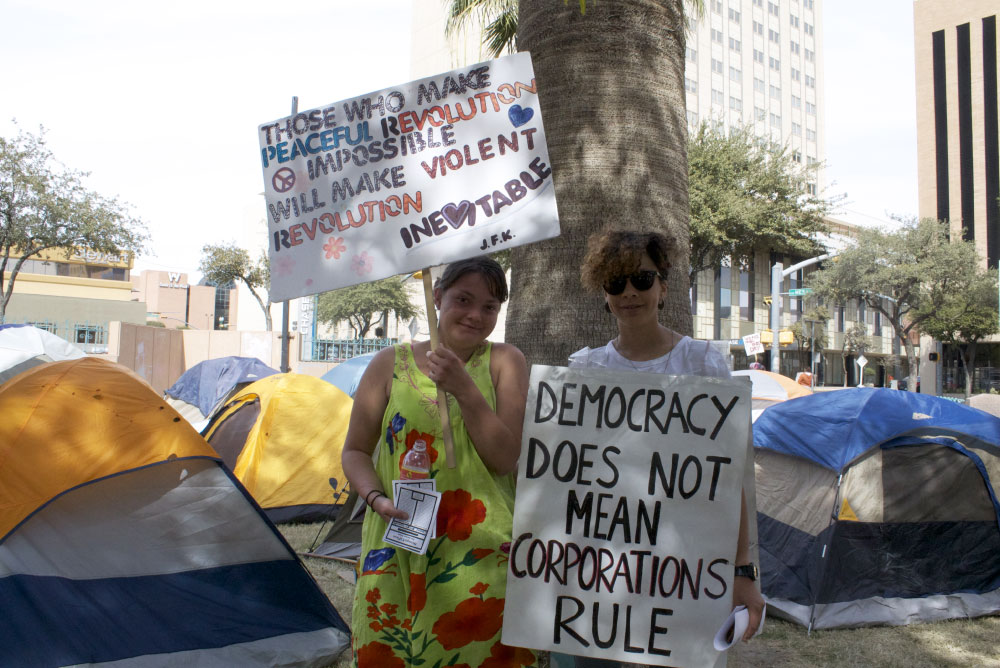 “Should I allow myself to live like this any more and let this injustice continue?” asks an Occupier. (Jacqueline Armijo/Borderzine.com) “Should I allow myself to live like this any more and let this injustice continue?” asks an Occupier. (Jacqueline Armijo/Borderzine.com)

EL PASO – Protesters crawled out of their tents and stretched as the morning sun greeted them at San Jacinto Plaza, all of them sharing a passion for banning corporate greed.

At first I didn’t know how to feel about Occupy Wall Street, which is a movement that has gained momentum and spread to other parts of the U.S. and even the world. You have people protesting in Rhode Island, California, and Virginia and even in England. The movement is made up of people who established a peaceful protest although they come from different political backgrounds and religions.

They argue that there should be an end to the corruption and self-indulgence of the wealthiest one percent of the U.S. population, which is inflicting a wrong upon the rest of the U.S. – the other 99 percent of Americans. These people in the park have felt mistreated by the major corporate forces and feel they have been the targets of a huge unfairness.

The protesters say corporations acquire wealth from the environment that they are harming and from underpaid workers. They maintain that corporations abuse their power in the U.S. economy by focusing more on making money than they do on the people they harm along the way.

I decided to visit San Jacinto Plaza where the El Paso division of this Occupy movement has installed itself to interview some of the protesters and gain a better understanding of the purpose of this movement and what influenced them to be a part of it.

One woman was uneasy about talking, but once I told her I wanted to know their side of the story she gained the confidence to explain, “There is a lot of greed; many are homeless; just a lot of wrong in our country and it has occurred for so many years.”

People are finally tired of this unfair difference between the rich and the poor, she said. “The rich aren’t getting taxed and we are getting taxed out of our asses. We should be scared.” A medicine teepee was donated to provide support to Occupiers with children. (Jacqueline Armijo/Borderzine.com)

She said she is there to spread the word and give others the opportunity to have a voice. “Should I allow myself to live like this any more and let this injustice continue?”

Her friend – born in South Africa and who lived in Australia – said that people who are part of the movement in Australia are getting beat up, “It was brutal in Australia.  They were grabbing people, destroying their camps, demolishing them without remorse. Getting completely annihilated by the government – a really shitty situation around the world.”

Walking toward the plaza I noticed a huge teepee, impossible to miss. A woman representing the indigenous community of El Paso explained that the teepee was there to support the movement, “The spiritual leaders have donated the medicine teepee. This is about Occupying Wall Street, Occupying El Paso, the culture of corporations that kill our mother earth, that kill the people and don’t regard the children, the seeds of our future generations. We are here to occupy. This is designated for families with children and is here to offer medicine to this community.”

So as I walked around the plaza and got to know these protesters, I saw that although they were from different backgrounds they all agreed that this injustice couldn’t go on. They believe that they have the power to speak out about corruption and make more persons aware of the problem – that major corporations forsake their principles harming the environment and those living in poverty.

This is a noble cause and hopefully more people will join the movement so we can all share from the benefits of fairness.