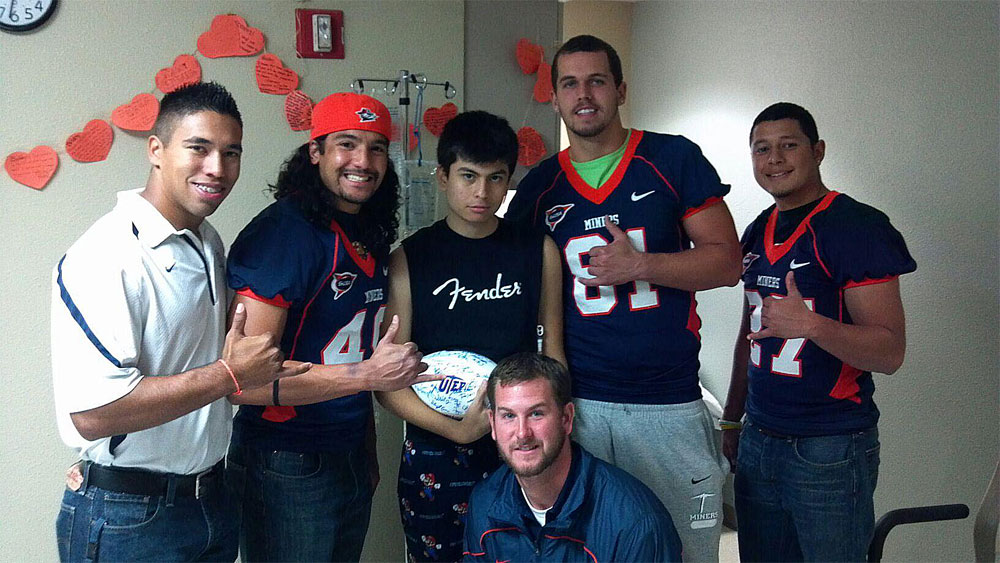 UTEP football team members visit Bobby (center) to give him a signed football while in the hospital. (Courtesy of Bobby Garcia)

EL PASO – I will never forget the Thursday morning I heard my weeping mother say the four scariest words I had ever heard, “Your brother has leukemia.”

As those words left her mouth, an indescribably sickening feeling shook my body and a million thoughts rushed through my mind. Thoughts of anger and fear consumed my very being at that moment, but as I looked up at my brother I remember seeing his face. He was unremarkably calm. I expected to see him crying or worried. Those were feelings I know I would be expressing if I had received that terrible diagnosis. UTEP football team members visit Bobby (center) to give him a signed football while in the hospital. (Courtesy of Bobby Garcia)

I first though his calm exterior was due to the initial shock of hearing about his condition. After a few moments my brother turned around and told me, “It’s OK Jay, I’m strong. I am going to fight this and I am going to get through this.”

My brother’s name is Bobby Garcia. He is 17 years old. He was in the process of finishing up his senior year in high school. Out of all the things that could happen to anyone, leukemia was the last thing I would have expected to hit one of my loved ones.

My brother made it a point to keep himself healthy by exercising and eating right. He was on the football team and was involved in track and basketball.
My brother was diagnosed with acute lymphoblastic leukemia on Thursday, November 3 2011. Members of the Emanuel Warriors and friends shave thier heads to show support for Bobby. (Courtesy of Bobby Garcia)

I was scared for him, as any brother would be. I was scared for him the day he was told that he would have to undergo aggressive sessions of chemotherapy. But my brother again astonished me with his sense of calm and courage as he accepted the treatments as a new way of life.

My brother has always been passionate about helping others throughout his life. Now, he says he is going to turn this difficult chapter in his young life into a positive experience.

“I want to help people who are going through this. I know that there are some people who are scared and who think they can’t handle this, and I want to be there to tell them it’s OK,” he said.

My brother began to write a blog as soon as he was admitted to the oncology unit in Providence Hospital. I believe he found it therapeutic. Writing was his way to help others and to help himself express his feelings. “I want to start a blog to chronicle my experience with leukemia as a way to comfort people who have this disease and to comfort families who might be going through the same thing” said Bobby.

At the hospital we had the opportunity to meet other families who are going through the same ordeal. There was a sense of comfort as our families conversed about their experience with cancer.

There is an atmosphere like no other in the oncology unit at the hospital. One might have preconceived ideas of what goes on in the oncology unit. I know I always thought of it as full of sadness and fear, but the sense of courage and comfort overshadows those feelings.

The spirit of fight is well alive in those halls. It’s a spirit that my family and I share along with millions of other families who may be going through the same ordeal with cancer.

My brother has changed my life with this experience. I have witnessed the power of my family along with other families as we bond tightly together to fight the cancer.

Most of all, I have witnessed the power of courage my brother has shown me throughout this ordeal.

I say to all the families who may be struggling with cancer –you are not alone in this fight.

Bobby’s blog can be found at http://icanbeatcancer.blogspot.com/

Jesus Garcia is a multimedia journalism major with a background in graphic design.