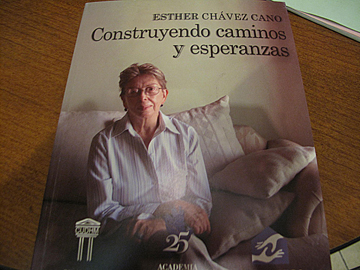 EL PASO — Esther Chavez Cano fought in Juarez against an epidemic of violence that killed 1,192 women during the last 18 years in what became known as the feminicidios.

Chavez Cano, who died in 2009, was remembered in El Paso February 25 as a beacon of hope for women in Juarez. “She was a symbol of accomplishment, social commitment and change,” said Dr. Moira Murphy, a Professor at the University of Texas at El Paso (UTEP).

Chavez Cano was a human rights activist who brought attention to terrible violence committed against women and children in Juarez, Mexico, a city in a fight against drugs, corruption, and murder. Chavez worked endlessly assisting families of women who were murdered or the survivors of violence.

Many gathered at the University of Texas at El Paso to commemorate her work. In 1999 Chavez Cano founded Casa Amiga, Juarez’s first rape crisis center, with the help of local businesses who donated a house and she raised the money to run the center through fundraisers and donations.

Services at Casa Amiga include anything from shelter, counseling, and medical assistance, to legal aid for victims or their families. Casa Amiga also helps educate the public on the rights of women and violence prevention.  Chavez was awarded the 2008 National Human Rights Prize in Mexico for her efforts

Although she died of cancer on December 25, 2009, many are continuing the fight for what she believed in.  Dr. Kathleen Staudt, a Political Science professor at the University of Texas at El Paso is one of these persons.  A close friend to Chavez, she writes on social injustice on the border.  She said she remembers Chavez as a powerful woman. “She was so short but she was so strong and she was eloquent and she could challenge authority figures and she didn’t have fear, ” Staudt said.

Staudt was also recognized for the dedication of a special collection housed in Casa Amiga.  Tears filled her eyes when it was her turn to honor Chavez.  A great friend of Esther Chavez Cano, she felt privileged to have the collection dedicated to her. “Kathy, through her work housed at Casa Amiga, will continue to walk beside Esther,” says Dr. Murphy.  However, Staudt feels Chavez is the one who needs to be recognized, “I was so honored by having the collection named after me.  I’m very touched and so honored but the main person that needs to be honored is Esther Chavez Cano for all of the work she did.”

One of Staudt’s supporters, Humberto Cruz, says, “She’s a great activist in our community of the El Paso Juarez Region.  She’s one of the only people who has written about the femicidios in English.” Despite the fact that she was a tiny woman, she is remembered as someone who had a beautiful voice, someone who worked to fight for justice for victims and had a great impact as a global citizen.  She worked on the Convention on the Elimination of All Forms of Discrimination against Women, adopted in 1979 by the United Nations general assembly, which is often described as an international bill of rights for women.  She helped to change many state laws in Chihuahua and pushed the government to address the crimes against woman.  She was instrumental in the opening of institutions for victims of femicidio.

“She should be honored for building an organization that still lives. The organization has not only survived, it has thrived, and I hope it continues to thrive if people continue to support it and remember that Casa Amiga was there when not that many other organizations were there, Esther was there and all of this helped bring visibility to the horrific femicides that were going on and sexualized killings of women,” Staudt said.

Chavez Cano’s life was celebrated and her book titled Construyendo Caminos y Esperanzas (Constructing Pathways and Hopes) was presented.  Dr. Maria Socorro Tabuenca recalls a time when she received a call from Chavez Cano telling her she wanted to write a book of her experiences.

The book includes the feminist movement in the state of Chihuahua and recognizes the different organizations that helped.  “There were many people who have given their lives to bring about the feminist movement and many committed to the cause,” said Dr. Irasema Coronado, also a professor at UTEP.

Staudt said the Chavez chose the appropriate title for the book, “She used the plural for hopes and pathways.  I think she recognized that people are able to do many different things to reduce and eliminate the violence in our everyday lives.  She recognized that people have many different pathways in the struggle against violence.” Staudt also said that having hope is important and that Chavez had hope, “She had hope. And she kept using that hope to keep herself going. And she gave people this hope.”

On the cover of the book, you can see a photo of Chavez.  Staudt described her as a short thin woman no taller than four-foot-ten but you would hear her say, “Very small but very strong.”  And that is exactly how others saw her.  They saw a small woman without fear, a woman who was a powerful speaker and embraced all.