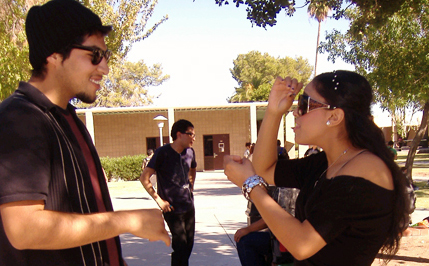 IMPERIAL, Calif.–When Nathan Enriquez first met his girlfriend Jocelyn Mirola two years ago, they didn’t know how to speak to each other. Not in the way that men are from Mars and women are from Venus, but they truly couldn’t communicate. “I liked Jocelyn and was interested in the way she communicated with others,” said Enriquez, a second-year student at Imperial Valley College. “But in order to get to know her I had to learn sign language.”

Mirola, 19, became deaf following a serious fever when she was 2 years old. Life was difficult, but Jocelyn persevered and is studying to become a counselor and make-up artist.

“I don’t plan to work yet, but I am planning to go to a university soon to become more skilled at my major,” Mirola said.

Enriquez is one of many hearing Americans who are making an effort—for personal or professional reasons—to learn not just the language of the deaf and hard of hearing, but their culture as well.

American Sign Language is a beautifully expressive language like Italian or French, and in fact is taught as a foreign language at Imperial Valley College.

“Sign language is a beautiful, visual language that has its own grammar, sentence structures, and syntax that is different from English,” said Reyna Gutierrez, a sign language professor at IVC, “therefore, special training and classes are important to be able to understand and communicate with the deaf.”

Mexican sign language also has the same aspects, and in this border region many of the deaf are taught LSM, or “lengua de señas mexicana,” which is vastly different from Spanish sign language.

Marisol Flores, 25, who has also been deaf since the age of 2, learned Spanish and Mexican sign language and did not understand a word in English or American Sign Language until seventh grade, at which time she attended deaf classes in the morning and public school in the afternoon, and never with the help of an interpreter. Oscar Herrera, left, watches Marisol Flores explain in sign language how her day went. Herrera is a hearing person who learned ASL to communicate with a deaf relative. --Photo by Liri Wu

“My hearing friends were able to help me out in writing notes explaining what the teacher said,” Flores recalled.

No matter which sign language is used, the deaf are often isolated by their own families who may not choose to learn it.

“Many parents of deaf children do not learn sign language and they grow up in a restricted learning environment,” Gutierrez said.  “They are neglected by their families, which leads the deaf to have to learn everything in the school system.”

Gutierrez added that many deaf youngsters suffer the indignities of unknowing and insensitive people, not just by distanced family members.  “There are many ignorant people that do not have the sensitivity or the patience to treat a deaf person with equality, because people do not get educated about deaf culture and values,” said Gutierrez, who is also the mother of a deaf daughter.

TJ Addison, 21, a third-year student at IVC, had a difficult time communicating with his father after becoming deaf in his right ear at the age of 9.

“I can only hear mhmmmmhm sounds in my mind when he spoke to me, since I can’t hear in my right ear,” said Addison, who had to attend special classes for sign language. Addison’s dad never learned to sign, but learned to adjust to his son’s condition. TJ Addison, who is deaf in one ear, tells Katherine Gonzales in ASL about the two things that he is going to accomplish before the Thanksgiving week ends. Gonzales watches closely so noise in the student center of Imperial Valley College does not distract her. --Photo by Liri Wu

Katherine Gonzalez, who is not deaf or hard of hearing, is studying ASL at IVC to become an interpreter. “I was first introduced to ASL when my dad used to work with the deaf in college,” Gonzales said. “He learned how to use a TTY, a special phone for the deaf. This device allowed for the messages back and forth between text telephones.”  Now, there are cell phones with texting plans that the deaf use more often.

“When I talk to the deaf people, they like to share a lot and are happy other people try to talk to them,” said Gonzales. Becoming an interpreter requires intense classes, several exams and interviews to prove a person’s knowledge and skill of ASL. Gonzales is now taking advanced classes in ASL and the deaf culture class, which “examines the experiences of a minority culture—its common past, present debates, and promises for the future,” as described in the IVC catalog.

About three in every 1,000 Americans is deaf or hard of hearing, according to research conducted by Gallaudet University.  As ASL instructor Gutierrez noted, it’s not surprising for a hearing person to be sitting right next to another person who cannot hear and not even know it because the deaf do not represent the “disabled” in lifestyle or independence.

More information on the deaf culture and languages can be found at the National Association of the Deaf.

I live in Calexico. I am 21. My major is English and I am considering creative writing and British literature as my major and minor. I plan to transfer to San Diego State University-Imperial Valley Campus in Fall of 2011. I love reading and writing and this is my first journalism class. ^_^